Streisand shared an image via Twitter of a large high-heeled shoe with the name Pelosi on the side, piercing through the body of a caricature of President Trump. Beneath him, you could see red blood spilling out.

Making a credible threat against the President of the United States, Vice President, or other government official is against the law. Anyone making such a threat could be charged with a felony which is punishable up to 5 years in federal prison and up to a $250,000. fine.

The United States Department of Justice indicated in January 2019, an individual from Puerto Rico threated President Trump. Another individual from Baton Rouge, Louisiana who made threats against the POTUS was found mentally competent to stand trial. 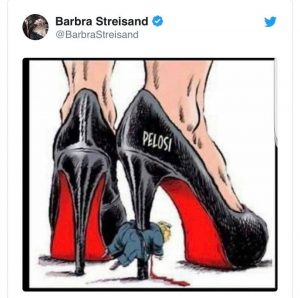 President Trump tweeted “Jail Time” in response to the video. Rapper Bow Wow chimed in with threats to President Trump with foul language that ended with another threat to the first lady in attempt to silence the President that read “Before we pimp your wife and make her work for us.”

Kathy Griffin posted a video holding a bloody head of President Trump in May 2017 during a photo shoot. After holding up what looked like scalped head of President Trump, “Saturday Night Live” started a “Stop the scalpings campaign.” Griffin later publicly blamed SNL creator Lorne Michaels for not being able to find work after that incident.

Streisand and Bette Midler have Twitter pages attributed to negativity towards President Trump. Actress Jane Fonda’s Twitter page contains hateful rhetoric for President Trump, where she has publicly stated she would be on the Capitol steps every Friday to fight for climate change. Fonda was recently arrested this past week, while protesting in the Washington D.C.

According to reports, actor Tom Arnold had members of the Secret Service show up at his door, after he made threats against President Trump and his son Donald Trump Jr. on social media. Actor Johnny Depp publicly made a threat against Trump stating “When was the last time an actor assassinated a president? I want to clarify, I’m not an actor. I lie for a living. However, it’s been a while, and maybe it’s time.”