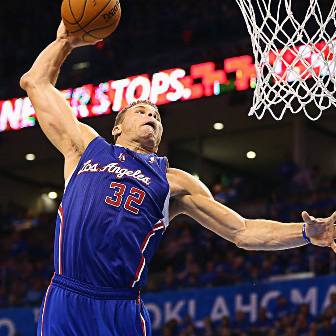 LOS ANGELES-After losing Game 3, the Los Angeles Clippers bounced back capturing a win over the Oklahoma Thunder in a nail bitter 101-99. The game was neck and neck between both teams all the way up till the final seconds. With the Thunder leading the series 2-1, the Clippers were determined not to fall 3-1 in the series, which would have forced them to win three games straight.

The Thunder literally controlled the momentum in the first quarter keeping the Clippers to a dismal 15 points, compared to the 32 points they placed on the board. That did not halt the Clippers from entertaining the home crowd by rebounding with a hefty 31 points in the second quarter. At half-time the team was down by 10 points.

Blake Griffin led the team in scoring with 25 points and nine rebounds. Griffin was playing on thin ice with five fouls during the entire fourth quarter, but with assistance from teammates Darren Collision and Jamal Crawford. Collision scored 18 points off the bench. Chris Paul scored 23 points and 10 assists.

For the Thunder, Russell Westbrook scored 27 points, and was responsible for cutting the Clippers lead to only 2 in the final seconds of the game, but a three-pointer attempt didn’t end in the basket. His teammate Kevin Durant scored a mighty 40 points. It was apparent that the Thunder needed a bit more assistance from the team to win Game 4, as Durant and Westbrook scored more than 60 percent of the team’s points.

A decisive Game 5 will take place on Tuesday where the Clippers will travel to Oklahoma to battle the Thunder once again.  Whoever wins will place themselves just 1 game away from heading to the Western Conference finals. Tip-off takes place at 9:30 p.m.