“I am deeply and sincerely sorry for my inappropriate and hurtful use of [the]racist term I used to describe Sen. Tim Scott on my personal Facebook page. It was insensitive, and I have embarrassed myself and my party by its use,” O’Connor told the Washington Examiner in a statement.

“As a result, I feel compelled to offer my resignation as chair of the Lamar County Democratic Party for consideration by the County Executive Committee.”

On May 6, Texas GOP leader, Allen West sent Oreo cookies to Democrats who refused to accept the resignation of their party chair who  condemned Scott’s anti-racism speech. Scott has faced backlash from members of the Democratic party noting he must not really be African American. 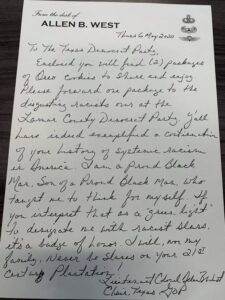 West, who has a following of 2,641,983 people on Facebook, wrote a handwritten letter he sent with the cookies to the Democrats condemning Senator Scott.

“See, that’s the problem. When you want to talk about institutionalized racism, when you want to talk about systemic racism, and the pervaders thereof, it’s the Democrat party.  They’ve always been. They never voted for the 13th, 14th, and 15th Amendments. They are the party of Jim Crow. They are the party of segregation, of slavery, and now because of the soft bigotry of low expectations that sees the independent thinking of black men and woman as a threat,” West added.

Scott cited his Christianity, and efforts of the Republican Party to work together in a bipartisan effort, “but Democrats wanted to go it alone.”

“They spent almost $2 Trillion on a partisan bill that the White House bragged that it ‘was the most liberal bill in history.’ Only one percent went to vaccinations. No requirements to open schools promptly. Hear me, America, is not a racist country,” Senator Scott stated.