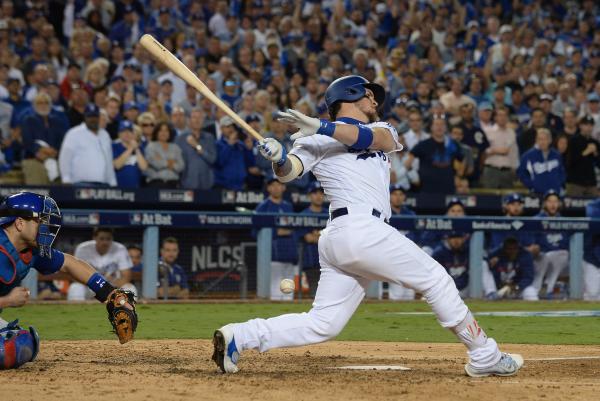 LOS ANGELES—Leave it to Clayton Kershaw to help end the Dodgers three game losing streak. The ace found his way out of a first inning bases loaded jam and the Dodger batters overcame their struggles against left handed pitchers in order beat the Colorado Rockies. LA had to overcome an especially bumpy start for Kershaw, who was irate after his first pitch was delayed because the opposing pitcher, Tyler Anderson, who the Dodgers have already bested this year, was still throwing pitches in the bullpen.

“That was one of the more disrespectful things I’ve been a part of in a game,” Kershaw said. “Really didn’t appreciate that. The game starts at 7:10. It’s started at 7:10 here for a long time. Go around or finish earlier but that wasn’t appreciated, for sure. I’m not going to say any more or I’ll get in trouble.”

Anderson is one of two left handed pitchers that the Dodgers have been able to defeat this year. His youth, having yet to play a full season, might have been the reason for his aloof behavior.

“I threw a few extra pitches in the bullpen before the game,” Anderson said. “I didn’t mean any disrespect by it. I was surprised the umpire didn’t let him pitch.”

Kershaw, who started the game walking a batter, then giving up two singles and one run off a sac fly, didn’t attribute his first inning struggles to the delay. In fact, Dodgers catcher Yasmani Grandal claimed that it actually helped the all-star pitcher.

“I don’t think it affected him. Actually, it kind of started a fire.” That’s probably the best way to describe it. Him actually doing that was probably a bad thing for them,” Grandal said in reference to Andersons late walk out of the bullpen. “It’s a learning process. He’s young. Hasn’t even had a year in the big leagues yet. He’ll learn from that and get it right.”

After the rocky start, Kershaw was able to right himself, retiring 12 consecutive batters following the first run he surrendered. He finished the game with 10 Ks through seven innings of work, giving up two earned runs off five hits. Thanks to the run support provided by the Dodgers, the Cy Young pitcher was able to record his third win of the young season.

The aforementioned run support mostly came in the 5th inning when the Dodgers were able to break a 1-1 tie after sending three batters past home plate. The three runs were a product of doubles by Chris Taylor (filling in for an injured Logan Forsythe) and Enrique Hernandez, a RBI single by Seager and a throwing error by Anderson on Kershaws sacrifice bunt attempt. The Rockies were able to score in the 6th inning when DJ LeMathieu doubled and a single by Stephen Cardullo sent him home, however, neither team scored again. Kenley Jansen came in to record his fourth save of the season and the Dodgers left Colorado with a 4-2 win and an 8-8 record.

Up next, after for the Rockies, after a well desrved day off they have a showdown with the division rival San Francisco Giants Meanwhile the Dodgers will send Alex Wood, (1-0) 1.00 ERA, who is filling in for Rich Hill in the rotation,  on the mound against the Arizona Diamondbacks.