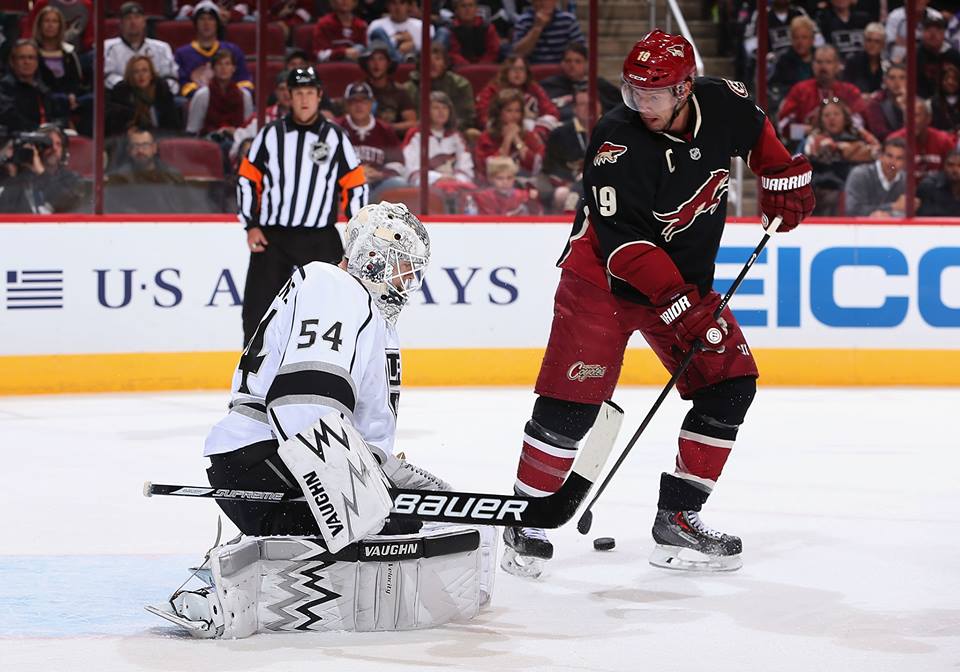 LOS ANGELES—A shootout ended with the Kings coming out of the veil of ice. Five Kings’ players scored, including a hat trick from Dwight King that gaveLos Angeles a 7-4 victory over the Phoenix Coyotes on October 24.

The Kings opened up the scoring 42 seconds into the first period on a power play that began only 21 seconds with Anze Kopitar sending a wrist shot past Coyotes netminder Mike Smith for his first of the season and the tip of the iceberg for LA. King began his run for his first career hat trick with a snapper in the fourth minute of play to record his second of the season, and first since October 11.

Jordan Nolan made it 3-0 midway through on a three man pass play to record his second. Smith accepted his last allowed goal of the night to King on a tip in front of the net to be pulled after the end of the period. Los Angelesoutshout them 15-5 in what looked like a massacre yet to be finished.

Little did the Kings know that a pep talk that the Coyotes had taken in the first intermission gave them a huge chance for a comeback. It began on a Jeff Halpern goal that left him open on the stick side of Jonathan Quick where no one covered the center’s shot to put Phoenix on the board. Martin Hanzal scored his third on a backhander for his 3rd to put them down by two goals. The Coyotes found their niche at the right time keeping pace with Los Angeles’ 12 shots on the net, but the third period brought a desperate race for the win.

Phoenix started the third period much like where they left off, on the power play where Hanzal scored his second of the night on a redirect from Keith Yandle’s drive on the far end. Coyote’s captain Shane Doan tied the game at four with a drive near the center of the blue line to do what few teams succeed in the regular seasons with four unanswered.

It only took the Kings a short time to regroup for a near failure to go back on the offensive, and fast. On a Phoenix power play, Mike Richards made a fast steal in the neutral zone to break away and score his first while shorthanded.

Los Angeles got lucky on a tip in front of the crease that went to Matt Frattin who notched his first goal with the Kings and take a second two goal lead. Since Phoenix made a miraculous comeback earlier in regulation a motion to pull goaltender Thomas Greiss in the final 41 seconds, but King went for the easy hat trick at 19:38 with a simple wrister to end the night for Phoenix to stay on top. The Kings hosted Edmonton on Sunday, before going to Glendaleto hold off a sure revenge the Coyotes will want to deal them on Tuesday.