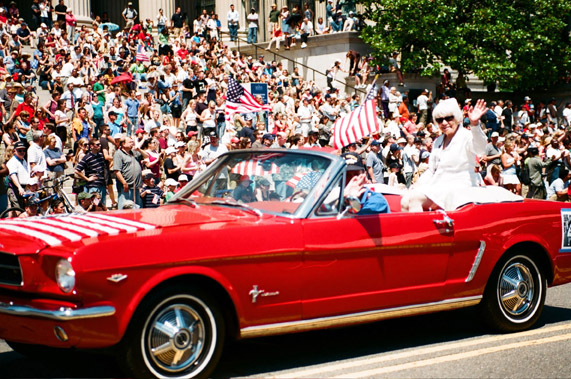 HOLLYWOOD HILLS—On June 20, Hollywood icon Edith Shain passed away at the age of 91. For the past three years, Shain had campaigned vigorously to have Congress officially designate the second Sunday in every August an official day to honor the ordinary men and women of her generation who endured the Great Depression, saved Western Civilization and went on to rebuild the postwar world.

It was her hope that the example of the WWII generation’s courage, self sacrifice, national unity and commitment to service to their country and their community would be carried forward in such a way as to be a source of inspiration to future generations, especially at a time when America is again facing historic challenges. She was especially concerned that the youth of America be engaged in preserving this legacy of service to others and coming together as a community to face adversity.

The Chairman of the House Veterans Affairs Committee Bob Filner (D-CA) and Ranking Member Steve Buyer (R-IND) are inviting all their colleagues to co-sponsor House Concurrent Resolution 226, officially designating August 14 as National Spirit of ’45 Day. Last week members of the California state legislature shared their personal stories about their fathers and encounters with the men and women of the WWII generation, before they unanimously passed a bill to officially designate August 14, as Spirit of ’45 Day in California. Louisiana had passed similar legislation earlier this month.

Shain who had recently appeared in several national parades in New York and Washington D.C., was scheduled to appear in Times Square on August 14, to kick off a series of public events that are scheduled in more than 100 communities that will culminate in a cross country performance of “Taps” played by 10,000 buglers as a tribute to the 400,000 Americans who lost their lives in WWII and those members of the Greatest Generation, who, like Edith Shain, have since passed on into history.

Edith had hoped to celebrate her 92nd birthday prior to the nationwide celebration of the 65th anniversary of the end of WWII by attending the 2 p.m. performance of South Pacific at the Ahmanson Theatre in Los Angeles with several WWII veterans on July 3. Plans had been made to have a pre-performance reception in Shain’s honor from 12 to 1:30 p.m. during which some brief comments would be made about Shain and the Keep the Spirit of ’45 Alive effort and what is planned for August 14 in LA. Although slightly altered, the schedule will remain largely unchanged. All the veterans tickets have been donated by Edith herself in commemoration of those valiant soldiers who fought in the Pacific.

Edith often said that she became an “accidental celebrity” when she was photographed by Alfred Eisenstadt as she was kissed by a joyous sailor in Times Square on the day World War II ended on August 14, 1945, a photo that appeared on the cover of Life magazine and quickly became an iconic image recognized around the world.

There is a website describing Edith’s project at Spiritof45.org.