UNITED STATES—There IS a reason our country has laws against hate crimes.

As with many other crimes, we had to create laws to protect Americans from the hate being taught behind closed familial doors. Parents teach children the basics of life, including hate and preferences such as; pink is the prettiest color, football is the only sport worth watching, or that vegetables are yucky.

When we hear the word eugenics we think of Hitler and his attempt to exterminate Jewish or others deemed less than, but did you know that AMERICA had Eugenics laws that called for the sterilization of people, as an attempt to lessen the burden of government cost and overcrowded institutions?

Unmarried women who became pregnant found themselves with forced sterilization, less than 100 years ago?

California sterilized more than 20,000 people between 1909-1963, and I cannot help but wonder, if we were standing in the shoes of our early 20th century American ancestors, how many of us would support the same legislation in order to curb the “drain” on taxpayers?

Mental defectives and imbeciles were being sterilized at such an alarming rate that organizations had to be created to fight for people being singled out as defective because of conditions like: “arthritis, asthma, deafness, deformities, heart disease, poor eyesight, poor physical development and spinal curvature.”

Take a look at this image from a special report put out by the Board of Charities and Corrections, in regards to the growing problem of “weak-mindedness” in Virgina.

So, as with all good progressive and civilized peoples: laws were created to stop the government from practicing hate toward certain groups.

That did not stop the superiority from rearing it’s ugly head behind closed doors, though. Corruption and misuse of power was taught in a number of ways and for just as many reasons.

Just as we know that parents are the largest contributor to the development of a child’s personality, we know they teach debilitating traits such as LEARNED HELPLESSNESS and that “narcissistic traits start appearing in children as young as seven, the age they start comparing themselves to others.”

Many parents simply teach as they were raised: believing the ANGLO part of them was supreme. Sometimes the eugenic individual would react to those that were different with violence, and other times they would merely shun: both reactions had an effect on the next generation.

Take a look at these boys that were labeled defective, one of which seems to have a talent for drawing. Another boy is in what many would label a feminine position, especially for this 1898 America. 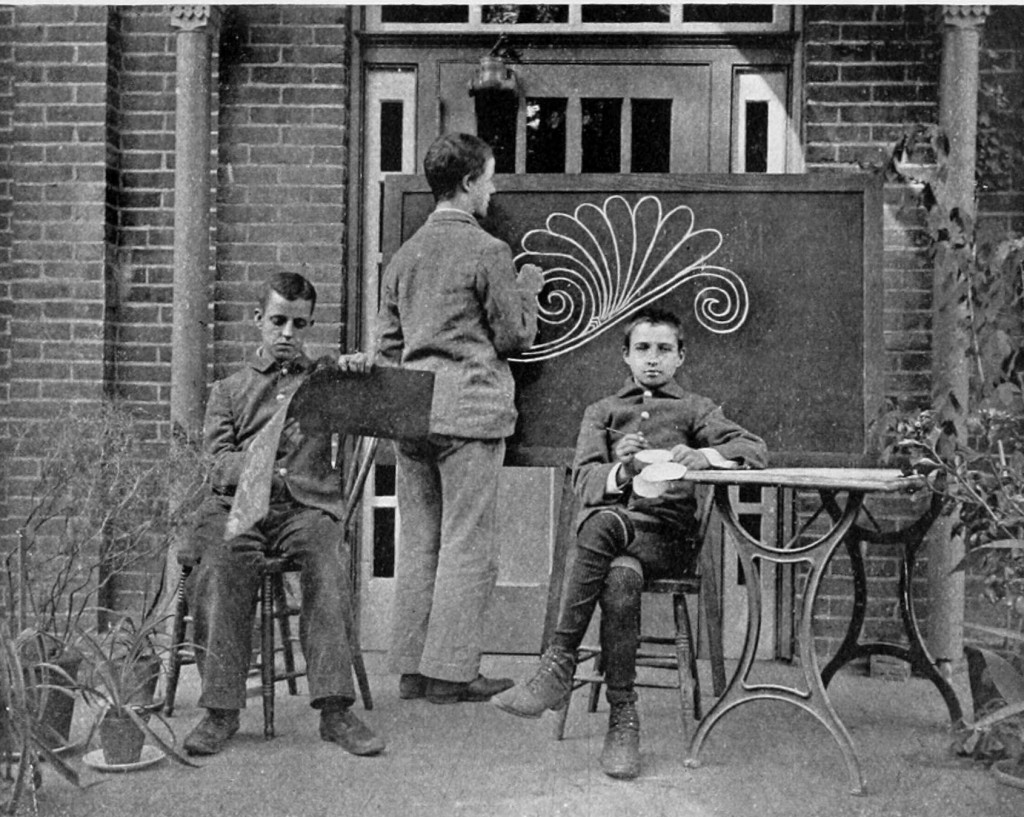 Around the same time as eugenic teachings were outlawed, published studies appeared, reporting the importance of a child’s self-esteem.

Parents responded with non-stop praise of their child, leading to a new type of superiority that is now well-embedded into the American psyche.

Now we had a large group of Americans with 1 of 2 popular growing illogical belief systems:

It is precisely this “overvaluing” that is creating our new era of narcissists, according to a Washington Post article that also says a parent should learn how to convey positive affections without necessarily placing the child on a pedestal, possibly instilling superiority.

Sometimes parents teach hate without intending to do so, by placing too much emphasis on what makes “US” different than “THEM,” unwittingly planting the seed of difference into the child’s head. It could be as simple as altering the parent’s statement from “You are the smartest child in the whole world!” to “We are so lucky we can be as smart as WE TRY to be!”

It is sad that we have to be so politically sensitive and careful in our parenting, but true nonetheless.

In closing I would like to recommend a movie that I BELIEVE should be shown in every American school, “Crash.” In case you haven’t seen it, forget renting: BUY IT!

Thandie Newton won Best Performance by an Actress in a Supporting Role and the movie itself won many deserved awards! This fantastic storyline portrays several struggles of racism that Americans still deal with.

At some point you will cry and then be glad you did because this movie is powerful enough to help people understand how many different venomous roots of hatred there are here, in America.