UNITED STATES—March is the month of the redhead and I’d like to think that if I were born somewhere other than soul-crushing Upstate New York, I would have been a Queen or Princess!

I’m not kidding either! Queen Anne Boleyn and I share foreparents Anne Hoo and Geoffrey Plantagenet! This could be wishful thinking, but I think I see a resemblance. 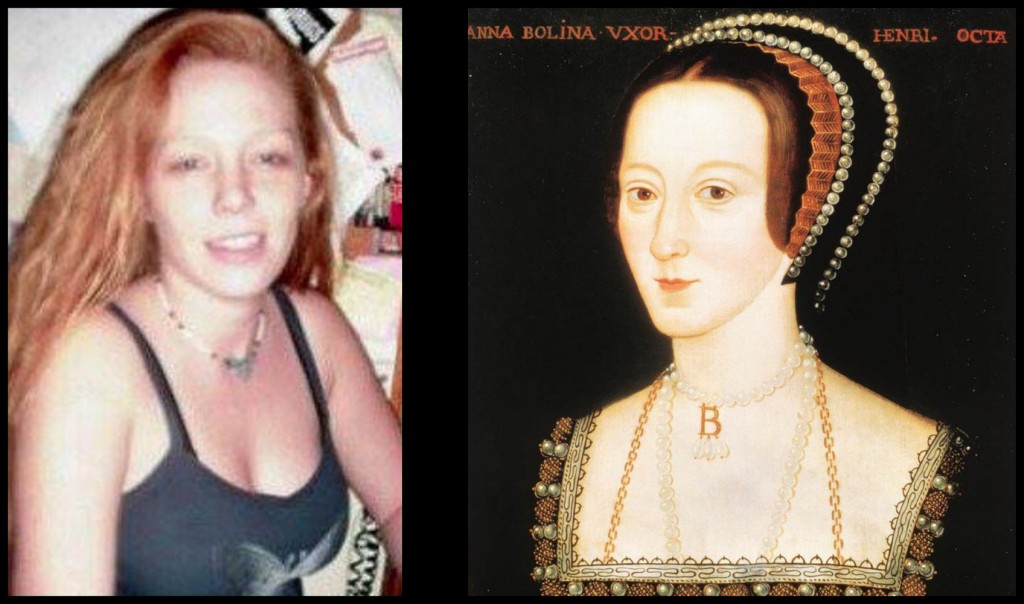 This is a good place to start my writing, because Anne Boleyn was a controversial redhead who proves that the future of redheads is not so much luck, but the ever-debatable NATURE vs NURTURE.

If the redhead is treated like a “redheaded stepchild” then what do you think will happen? Typically failure.

Redheaded children were considered undesirable with unadoptable tempers. Romanians thought redheads were troubled souls and would become an evil and possibly vampiric “strigoi.” Redheaded slaves would have cost extra in Rome. Like the horrific Albino trade: when there is demand people will HUNT to meet it.

I believe being redheaded was a curse, but that’s because I was never lucky enough to enjoy the blessing part of the “blessing and curse” redhead ideology, only the negative side: family AND strangers pet, stare, grope OR WORSE if they could get away with it.

Did anyone ever stop to think that the reason they say redheads have no soul is because someone, STOLE IT? Click here for a presentation by Cartman on South Park, explaining why there was a need to get rid of Gingers, sparking the Angry Ginger response.

I have always described the love/hate of redheads as comparable to Limburger cheese – you love us or you HATE us.

Gingers have a Redhead Festival and in Scotland they’re testing the massive proliferation of the red-hair variant in a HUGE study.

Although Egyptians skin is usually considered darker, Cleopatra is from the light skinned Ptolemaic dynasty and a fresco in Herculaneum has people theorizing that Cleopatra was a redhead. Hmm… A tall reddish hair GODLIKE race in Egypt?

Click here to see examples of busts created while she was alive to capture her TRUE likeness.

Greek prophetesses called SIBYL were redheads, and so was Helen of Troy: a beauty said to have started the Trojan War!

I’ve been engrossed reading about the origins of red hair, and its quality of being loved or hated.

Sometimes we are LOVED, like Alice Guérin, described as “the artist’s (Paul Cesar Helleu) wife and muse” (image to left).

I know for a fact she isn’t the only redhead to be declared a muse!

Besides love and hate, there are things people DON’T UNDERSTAND, like how redheads require more pain medicine to kill pain and more anesthesia to render them unconsciousness.

Evolution made us different, but accepted us: spotted faces and all!

Science says Neanderthal and Homo Sapiens co-existed, perhaps breeding together is what sparked the first redhead? Or maybe a nutritional deficiency over several generations caused the redheaded gene to be embedded as a hidden trait that can stay dormant for several years.

There are plenty of REDHEADS IN THE BIBLE!

Michelangelo’s representation of the BIBLICAL ICONS were certainly redheaded!

Others depicted the Godly family as red haired. Here’s a couple of pre-17th century paintings that show a redheaded baby Jesus!

Christopher Witcombe of Sweet Briar college writes about the inconsistencies in the Old Testament concerning the EVIL and RED-HAIRED Lilith. Possibly the beginning of red hair being considered EVIL? Ancient men would have preferred the docile Eve to the rebellious and non-subservient Lilith.

Here’s ONE MORE group of images, this time showing the two women in Jesus’s life (and Lillith) as redheads. If you love old art, Wikimedia Commons has a breathtaking abundance!

I have an interesting theory of how red hair evolved.

An ancestry.com DNA test showed 0-1% of a region called ASIA CENTRAL and 0-1% AFRICA: SENEGAL. At first I considered this an offshoot ancestor’s DNA. Then I realized it could be primitive DNA: from my line of original redheads!

The Complete Idiot’s Guide to Evolution mentions Maupertuis’s documentation of African Albinos coming from Senegal, to 19th century France. Coincidentally, both the Irish and the Paiute Indians have mythological stories of red haired humans coming down from mountains and clouds…

Central Asia is where the famously tall and red-haired Tarim mummies were found, most notably the 1,000 BC Cherchen Man. MORE ancient are the 3,500-2,500 BC red-haired Tocharians. Within the last decade an Israeli magazine described the discovery of of a person with leprosy, but died from tuberculosis. The clump of hair was reddish.

The polymorphisms of the Jewish remains matched those found in the Jesus family tomb, not too far away.

Could freckles be a convoluted genetic factor that is really a leftover from our resistance to leprosy? Um… One of the side effects of the disease is the inability to feel pain? WE HAVE ALREADY ESTABLISHED a pain anomaly with redheads!

Look again at how the Red Haired Mary Magdalene holds the “vessel” over her heart. This was painted by Pre-Raphaelite Brotherhood painter Frederick Sandys, by the way!

Could Mary be the bearer (vessel) of Jesus’s GOLDEN-HAIRED heavenly genetic DNA: the original redhead?