UNITED STATES—Just as physical abuse can KILL the body, too much mental trauma can KILL the mind, rendering an individual as useless as a body full of broken bones. Just take a look into the BLANK STARES of the 13 million + traumatized individuals walking around America, at any given time.

Those with a spirit that has been MURDERED but because you cannot see a dead soul Uncle Sam does not protect it.

Wiley Concise Guides on Mental Health: Posttraumatic Stress Disorder tells us the term was first used in 1980, and considered to be caused by something “beyond the range of normal human experience.”

Thankfully, knowledge about this anxiety disorder has evolved, according to The National Institute of Mental Health (NIMH). Researchers are finding factors besides trauma, that influence “fear memories,” mainly brain and gene abnormalities. NIMH also tells us that it is NOT ONLY actual trauma that leaves mental scars, but; “the person who develops PTSD may have been the one who was harmed, the harm may have happened to a loved one, or the person may have witnessed a harmful event that happened to loved ones or strangers.”

War, Rape, and Accidents are just a few of the well-known causes.

Research says that disasters and single traumatizing events are not as likely to cause PTSD as “interpersonal trauma,” (i.e. child abuse, sexual) does. The National Center for PTSD says that 5 out of 10 women will experience a traumatic event in their life, and sadly, they also list some commonly known negative reactions, such as major depressive disorder or drug and alcohol use.

One study listed car accidents as the number one traumatic event that causes PTSD. Over 19,000 people were killed in accidents between January-June 2015, according to Newsweek!

We know more than ever about PTSD, but what about before the well known name?

I find every era has traumatized survivors, sparking many different ways to describe similar conditions. People who were NEVER the same again. Here is a chronological view, and I am sure I missed many…

1925 New Yorker publishes article claiming 250,000 per year are dying before age 50, from Americanitis. Then condition is described in China.

Matthew Friedman, Executive Director of the VA’s National Center for Post-Traumatic Stress Disorder tells Frontline (in interview) that the term “Soldier’s Heart” is one of the terms for PTSD during the Civil War era because “there was general recognition that they had been changed, and that many of those changes were not for the good.”

1867 Railway Spine, aka Compensation Neurosis: PTSD-like condition in those involved in train accidents. They believe the mind has been affected as a result of the shaking of the spine.

1850 Charles Dickens writes about being mentally weak after a train accident and they say he never wrote the same again, or rode a train.

1600 AD Shakespeare tells a tale of Lady Macbeth having nightmares and eventual suicide as a result of her husband killing the King. Sounds like the first case of secondary PTSD!

500 BC Biblical JOB was traumatized.

Around 700 BC Charlotte Higgins reminds us of Homer’s The Iliad being the “first great book about the suffering and loss of war.”

In the end the earliest I can find is  1000 BC Dr. Ruwan Jayatunge’s STORY of Hori, what he believes is the EARLIEST description of PTSD: an Egyptian account of a traumatic experience making a person hysterical.

This tells me that we have always understood Man’s role in the development of PTSD, and the only thing that evolved was the system of rules and laws that were designed to stop humans from becoming traumatized in the first place.

I will leave those of you who still posses faith with some words that may help lessen suffering: Psalm 23 (NIV) “Even though I walk through the darkest valley, I will fear no evil, for you are with me” and also Psalm 27 (NIV) gives comfort in times of fear: “Though an army besiege me, my heart will not fear; though war break out against me, even then I will be confident.” 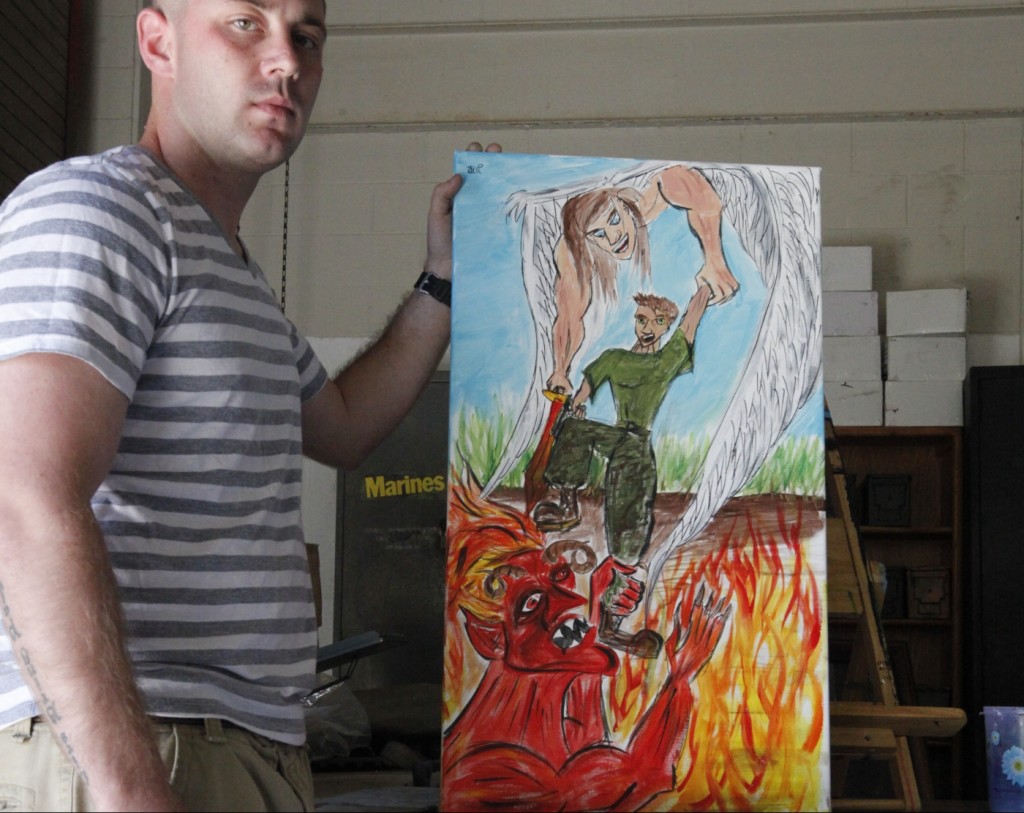 Sgt. Shane P. Santelli, displays his painting,  showing a Marine going through a struggle. The devil  represents PTSD and is pulling him downward while St. Michael pulls him upward.