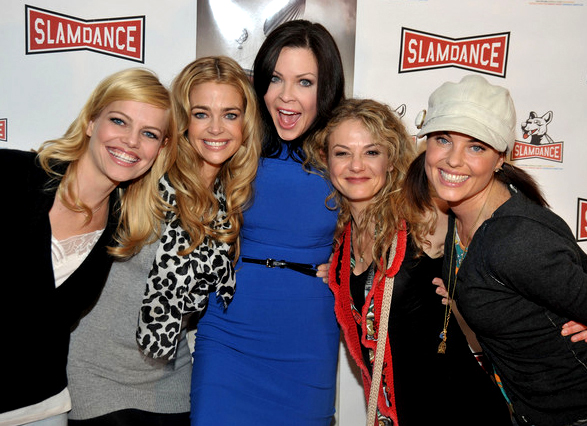 STUDIO CITY—In anticipation of next week’s L.A. premiere of “Finding Bliss,” local filmmaker and actress Julie Davis, who is also starring in Henry Jaglom’s amazing stage play “45 Minutes From Broadway,” traveled to NYC for the premiere of her film, which took the Big Apple by storm. Critics and fans piled into the City Cinemas theater in the East Village on Friday to see one of the best Independent films in decades. “Finding Bliss” is a raucous and hilarious look at a young woman who moves to Hollywood and finds herself venturing into the porn industry as an editor and producer in order to break into the entertainment field. That young lady is being portrayed by the film’s star Leelee Sobieski.

The film also stars Denise Richards, Kristen Johnson, Jamie Kennedy, Matt Davis, Mircea Monroe and Christa Campbell. Monroe and Campbell will become huge stars like their costars after their mesmerizing and incredible performances are seen by Hollywood film producers. Davis is very good at picking out new talent, and she has done just that with these two beautiful actresses.

Fans and moviegoers had the opportunity to ask the producers and some of the stars questions after the premiere, with the audience collectively agreeing that Julie Davis is an up-and-coming producer who offers an intriguing and fascinating look into a story about a young girl coming to Hollywood, and Davis’s intuitions as a filmmaker are spot on. Davis based the film partially on her life, a Jewish American princess who moved to Hollywood only to find the production side of the porn industry as her first foray into the entertainment world. After shocking her conservative parents, they now celebrate her latest success in the film that should be seen by everyone who wants to become a star or wants to simply laugh their way through a movie. Jamie Kennedy, Leelee Sobieski and Denise Richards stand out in this film, but the entire ensemble is perfectly cast and directed in a thrilling comedic adventure story.

To learn more about “Finding Bliss,” go to the movie’s official site at findingblissthemovie.com.

“Walking Dead” Recap: ‘On The Inside’