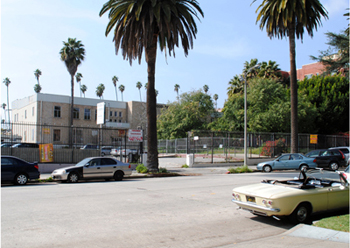 LOS ANGELES—An estimated 150 firefighters from the Los Angeles Fire Department were needed to put out a large fire at a two-story church in Hollywood on the evening of January 1, 2012.  At about 5:41pm, approximately 56 firefighting units under the command of Battalion Chief J. Castro were called to the site of a vacant church once known as The Hollywood Christian Church located at 1717 North Gramercy Place, according to information from the LAFD blog.

After arriving at the scene about 6pm, firefighters found heavy flames coming from the second story of the 1923 church, which also had classrooms attached to the building.  Firefighters had a hard time accessing the roof of the 100’ x 50’ structure with their aerial ladder trucks due to the church being deep set and located in the middle of the street block.  After gaining access to the roof by using 35’ ground ladders, firefighters were able to limit the horizontal spread of the fire by cutting three strips off the rooftop for ventilation.  At the same time, firefighters also used hand-lines to tackle flames coming from inside the church.

According to LAFD spokesman Erik Scott, a “very aggressive” fire attack ensued for 1 hour. He added that some firefighters went through three self contained breathing bottles battling the inferno during their “offensive and exhaustive” attack. No injuries were reported in the blaze that damaged the basement, first floor, second floor and attic.  The estimated loss from the fire is still being determined while the cause of the blaze remains under active investigation.

The Hollywood Christian Church, which opened in 1923 on Gramercy Place after moving from Gower Street, was designed by church architect Robert H. Orr and featured a majestic brick and terra cotta Greek Revival sanctuary, according to Urban Diachrony blog.  In the years after WWII, the church, now known as Hollywood-Beverly Christian Church, possessed a large congregation, which included the family of the late and former U.S. President Ronald Reagan.  Congregations however dropped steeply in subsequent years as its surrounding neighborhoods underwent high population turnover.  In addition, the eastern Hollywood area became known for crime and drug activity.  The church and its facilities suffered significant damage when the 1971 Sylmar and 1987 Whittier earthquakes struck.  After the congregation was unable to raise the $500,000 necessary to repair the damaged auditorium, the facilities including the church were closed.