According to a press release by the Middle District of Pennsylvania, the Department of Justice is investigating a potential issue with mail-in ballots.

On September 21, at the request of Luzerne County District Attorney, Stefanie Salavantis, the Office of the U.S. States Attorney, along with the FBI (Scranton Res. Office) are investigating reports of several military mail-in ballots that appeared to be specifically voting for President Trump that may have been discarded with reports stating, “Investigators have recovered nine ballots at this time.”

Wisconsin law allows a witness to cast a ballot for someone who may not be able to do it themselves providing that both the voter and the witness provide signatures and addresses. If the witness’s address is not listed, it is not allowed. Wisconsin law specifically states any missing information must be resolved prior to Election Day.

According to reports it is alleged that Wisconsin election clerks  altered thousands of ballots. In ballots that would not have been legal without the witness information, the clerks reportedly filled that section themselves.

Before either the former Vice President Joe Biden or President Trump are to be officially elected as President of the United States for the next four years, all votes must be verified.

Each state’s Chief Election official will certify the election results in their state. On December 14, electors will cast their electoral votes based on the certified election results from each individual state.

President Trump tweeted, “71,000,000 legal votes. The most ever for a sitting President.” A tweet from Jim Jordan has been removed by Twitter.

In the state of Pennsylvania, a USPS worker reported a case in Traverse County where postal workers were reportedly directed to set aside ballots in the mail on November 4 so they may be hand stamped, November 3. That postal worker has recanted claims made.

In Pennsylvania, a man that had been buried six days prior was said to have cast a vote.A total of 92,000 Maricopa county votes along with 170,000 others in the state of Arizona have yet to be counted. 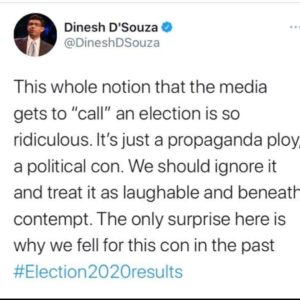 “One thing I’d like to tell the American people is, don’t give up hope. We have a lot of work to do.” Mitchell indicated that she believed that President Trump won the election.

Political Commentator Dinesh D’Souza advises the American people not to react to this political ploy by the media.