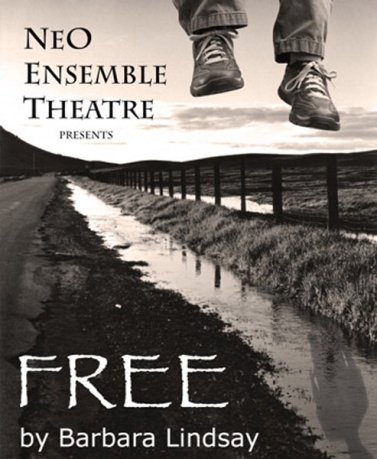 HOLLYWOOD— It’s “Free,” a whimsical comedy that explores the boundaries of friendship and gravity. Without the aid of mechanical devices, we can only slip the bonds of earth in our dreams and imaginations. However, no one seems to have told that to Marshall “Free” Gunther. Free is a floater who has to work at keeping himself tethered to the ground. He wants more than anything to be normal, but best friend Stoney thinks Free’s gift is a miracle that everyone should see. When Free decides he would rather clean motel rooms than defy gravity for indifferent audiences, he finds that the gift he doesn’t want has touched more lives than he realized.

“Free” originated as a one-act that was produced by L.A.’s Company of Angels in 1987. Barbara Lindsay continued to work on the play, and in 1989, she received the N.Y. Drama League Playwriting Award for the full-length version. In 1991, “Free” had its world premiere at the New Play Festival in London, England. Since then, Lindsay’s plays and monologues have received more than 170 national and international productions, including a Los Angeles Times Critic’s Choice production of “The Walkers” by the Road Theatre Co. in North Hollywood. Her full length play “I-2195” won the Women’s Playwriting Award at UM St. Louis and was produced there in November 2005. Her short play “Here to Serve You” won the Peace Play Prize awarded by Goshen College in Indiana. Lindsay’s new adaptation of “Medea” will premiere at Seattle’s Theatre 9/12 in January.

“I write my characters first, and it’s from them that I discover the story,” said Lindsay. “Stoney and Marshall had such distinct voices that they stayed with me and I knew I had to develop the play further. This was my first play, and it taught me how to be a playwright.”

WHERE: [Inside] the Ford
2580 Cahuenga Blvd. East in Hollywood
(just off the 101, across the freeway from the Hollywood Bowl and south of Universal Studios)

The 2010-11 Season at [Inside] the Ford is supported by the Los Angeles County Arts Commission and the Ford Theatre Foundation, with funding from the National Endowment for the Arts