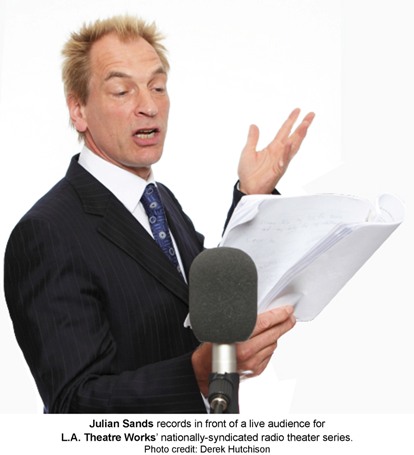 HOLLYWOOD—If you love to dish and gossip, don’t miss the malicious and delicious, “The School for Scandal.” A distinguished British cast, including Jane Carr, Julian Sands and Tara Summers will be directed by Michael Hackett when L.A. Theatre Works’ presents Richard Brinsley Sheridan’s comic masterpiece at the Skirball Cultural Center on January 12-16. The five performances will be recorded for L.A. Theatre Works’ nationally syndicated radio theater series, which airs locally in Southern California on KPCC 89.3 every Saturday from 10 p.m. until midnight and can be streamed on demand at latw.org.

Sheridan’s sparkling comedy of manners made its debut in 1777, but its hilarious examination of human frailty and hypocrisy is as relevant today as it was then. Brimming with witty dialogue, mistaken identities, supposed infidelity, eavesdropping and scandal, both real and invented, “The School For Scandal” is a delightful madcap and maliciously catty romp. Centuries before Jerry Springer, Ricki Lake and the National Enquirer appeared on the scene, Sheridan gave us such gossip-mongers as Lady Sneerwell, Widow Snake, Lady Candour and Benjamin Backbite in a comic story filled with complications, ironies, surprises and schemes that go horribly wrong – a prototype of situation comedy that reveals many of the same guilty pleasures and petty obsessions we know today. After all, slander and gossip never go out of style!

Richard Brinsley Sheridan was manager of the Drury Lane Theatre where he had a great influence on the theater of his time. “The School for Scandal” is studied around the world in high schools and theater schools, making him one of the most well known traditionalist playwrights, second only to Shakespeare. He later became a distinguished parliamentary orator. “The School for Scandal” was a favorite play of General George Washington, who was an inveterate theatergoer.

OTHER: L.A. Theatre Works’ radio theater series can be heard locally in Southern California on 89.3 KPCC every Saturday from 10 pm to midnight, and can also be streamed on demand at latw.org/. L.A. Theatre Works can also be heard on the following stations (check local listings for broadcast times): 89.7 WGBH, Boston; 91.5 FM WBEZ, Chicago; 94.9 KUOW, Seattle; 90.1 WABE, Atlanta; 94.1 KPFA, Berkeley; 91.1 KRCB, North Bay (San Francisco) and many other stations nationwide.