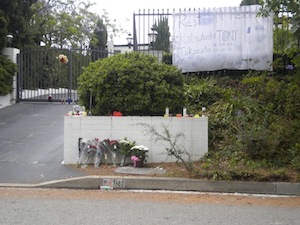 BEVERLY HILLS—On the morning of Tuesday, July 20, police responded to a 911 call on the 1800 block of Carla Ridge. After arriving at the Trousdale Estates, an exclusive Beverly Hills community, police discovered the body of a young man lying face down on the front lawn of his residence.

A friend of the victim, who wished to remain anonymous, stated to Canyon News, “The neighbors called the cops around 6 a.m. because they heard and saw a man hiding in the bushes and trying to jump the gate to his house. When the cops got there, he was face down already dead.” The man, identified as 21-year-old Katsutoshi Takazato, had been stabbed repeatedly and was declared dead on the scene.

Investigations revealed that at the time of the murder the victim lived alone in the home, which is owned by Hollywood producer Fuminori Hayashida. As of now, it is unclear what the relationship was between the victim and the homeowner, though speculations have included a family tie between the two.

Those who knew Takazato were shocked to find out about his murder, as he was believed to be a kind and generous person. Friends stated to Canyon News that “he didn’t deserve this.” Residents of the community were equally unnerved by the discovery of the murder. As police responded to the 911 call, residents who gathered at the scene were told to go home and stay locked inside their homes.

Armando Tovar, a construction worker working closer to the 1500 block of Carla Ridge said, “We [fellow construction workers and Tovar] were told by police to leave the day of the murder. I think the suspect was running and they thought he might be over here.”

As investigations into the crime were initiated, traffic blocks were set up to limit access into the neighborhood, and numerous police departments, including those of Santa Monica, Culver City and Glendale, made themselves available to assist. The search for suspects lasted through the night with the help of helicopters and officers in patrol cars and on foot.

Wednesday, police announced that they had made multiple arrests in connection with the murder. Three men were arrested and taken into custody. Although police are not revealing the names of the suspects, they did confirm that the suspects were not from Beverly Hills.