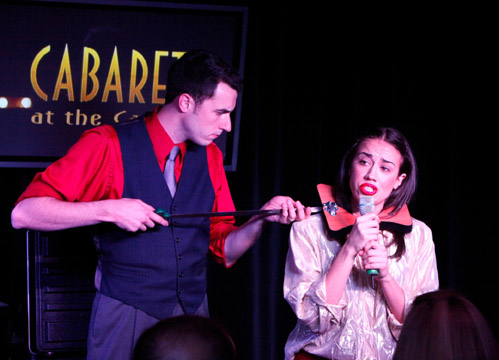 HOLLYWOOD—Colleen Ballinger is a classically trained singer and actress that is best known for her wildly popular YouTube character, “Miranda Sings.” The character is a satire of common YouTube videos featuring mediocre or even bad singers who film themselves singing as a form of self-promotion. Miranda sings comically off-key, and, when confronted by viewers who take the videos seriously, uses the catchphrase “Haters back off!” Ms. Ballinger’s character has enjoyed worldwide popularity with over five million views on YouTube, and has recently appeared as “Miranda Sings” at theater venues in New York, Los Angeles, San Francisco, London and Australia. Special guests have included the Broadway casts of “Mamma Mia,” “Billy Elliott,” “Bye Bye Birdie,” “Rock of Ages,” Ann Hampton Callaway, Shoshana Bean, Daniel Reichard, Seth Rudetsky, Christopher Sieber and Scott Alan.

Chris Ballinger has been performing magic professionally for over 15 years. Currently, he is the head of media for Magicgeek.com, where he has produced over 600 magic demonstrational videos that can be viewed on the website and on YouTube. He released three magic tricks last year, “Permanent,” “Anttack!” and “The Shark.” Through Magic Geek, Chris wrote, directed and edited six instructional DVDs on juggling, including “The Ultimate Juggling DVD,” featuring himself. Chris is currently working on the DVD for the latest Paul Harris trick, “Little Man,” as well as new projects of his own.

WHAT: For almost 40 years the Magic Castle has strictly catered to the 21-and-older crowd. Now, for one night only the club is open to 13 and older as they present YouTube sensation “Miranda Sings,” starring Colleen Ballinger and magician Chris Ballinger, who offer a show filled with ridiculous cabaret music, magic and mayhem! International performer “Miranda Sings” has been performing her one-woman cabaret show to sold-out audiences since last spring when her YouTube channel went viral. Her hilarious shows consist of singing hit songs, onstage voice lessons, fashion makeovers and dramatic readings of hate mail. You will not want to miss seeing this lipstick-wearing, epileptic-eyebrowed, crooked-smiling beauty live! Chris is the face of MagicGeek.com and dutifully lives up to the name of the company. His combination of improvisational comedy and magic has made him a huge hit on YouTube, and as a street performer and corporate magician. See this incredible duo as they join forces live for the first time to provide zany entertainment and non-stop laughter.