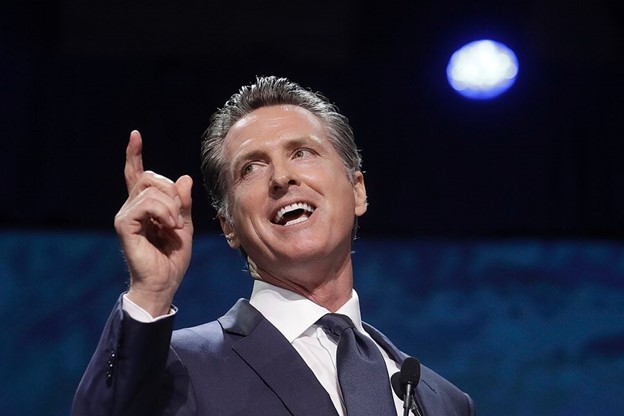 CALIFORNIA—Freedom of speech is almost dead but not quite so while it’s still slightly existing – here it goes. GAVIN NEWSOM IS AN UTTER HYPOCRITE.

Gavin Newsom, our handsome governor who looks like a good guy on camera is actually the Grinch that stole not only Christmas this year but plans to steal Thanksgiving and most likely New Years.

Although he constantly preaches that he wants to “save lives,” from the evil Coronavirus, he is nothing but a politician who tells you what you want to hear, invokes emotion, fear and extreme projections that are just simply outrageous and quite honestly, dangerous.

Back in March when we got the lockdown order, we were all panicking, finding our local markets to stock up on pasta and TP hoping that this nightmare would only last for a total of 15 days (like we were told). Now, almost a year later, we are here again, sitting in our homes (if we are lucky enough to still have one) waiting for another lockdown under Newsom’s order. But how we feel about it today is quite calmer than how we felt before isn’t it? This time the stay at home lockdown is not for 15 long days but 30 short ones. Now I know what you’re thinking… 30 days is double the time, but these lockdowns and communist-like rules seem normal to us at this point don’t they?

Remember when the thought of being told you cant’ leave your home left you uneasy? The thought of missing a wedding, church, a funeral or a baby shower was just insane? It does not feel that way anymore and it was all on purpose. The agenda of the left has always been to normalize this inhumane way of living and it’s working.

On July 1, Newsom state mandated that 19 counties in California shut down indoor operations and follow Covid guidelines. The guidelines that I am sure you’ve heard a million times by now included social distancing, sanitizing, small groups and being home by curfew as early as 1pm on some days. Of these counties, Napa was not included of course where Newsom runs his own winery that is part of the PlumpJack Group.

He even had the audacity to have his team edit a video to PROMOTE the winery during this national crisis but of course included that people should stay in small group and “socially distance.” Not only was this completely disrespectful to do as a state leader but hypocritical. Other businesses (especially restaurants and bars) around the country are shutting down because of HIS RULES and the classy thing to do would be to shut down his own. But no, just like Lori Lightfoot of Chicago and another CA winner, Eric Garcetti, democratic leaders are exempt from their own rules because they are on top and treat us as the puppets that they can control.

Flash forward to November 2020 and Newsom is back at it again. The San Francisco Chronicle (one of the few CA publications not afraid the left) broke a story that published pictures of good old Newsom at a very expensive restaurants in CA – the Michelin Star French Laundry in Napa County with a group of TWELVE people from various households. Now before I get into the blatant disgust of that alone lets discuss the fact that he had to actually take the risk of being seen in public with that many people NOT WEARING A MASK and HE DID IT ANYWAY. The people at the top are not trying to keep their hypocrisy a secret at all – no, no, no, they will gladly brush their wrong-doings under the rug because they CAN.

Anyway, the dinner was for a 50th birthday party for a lobbyist and friend of Newsom’s who goes by Jason Kinney. The fancy French Laundry dinner was held in a PRIVATE ROOM where nobody is socially distancing or wearing a mask.

A rep for Kinney, Molly Weeden said they “requested outside” and the restaurant provided them that although the photographs say a completely different story. You can clearly see the chandelier in the photographs…where would that be hanging from if it was outside? A tree in nature?  Newsom claimed that this was the only time he’s been out with anyone other than his wife and just this once it was a “larger group” with “just a few extra people there.”

CA Medical Association downplayed the dinner stating that they “followed guidelines.” I didn’t see them wearing a masks in between bites – in fact, I didn’t see anyone wearing one at all. Did you? Silly us, peasants all the way down here taking orders from the Grinch like little Cindy Lou Who’s. (forgive me, I just watched the movie, I am one beer deep & it’s fitting).

One of the guest was, Dustin Corcoran the Chief Executive Officer for the California Medical Association (CMA), a non-profit professional organization of about 50,000 physicians that is — and I quote from his own website, “dedicated to protecting public health and promoting the science and art of medicine.”

Newsom gave us peasants an apology stating, “I made a bad mistake. Instead of sitting down, I should have stood up and walked back, got in my car and drove back to my house. Instead I chose to sit there with my wife and a number of other couples that were outside the household.”

He thinks we are stupid. The left will do what they want with us as long as we keep listening. Like we should believe that he had no idea about who was attending the dinner? Imagine if he didn’t get caught. How often does he host dinner parties at his home? Is every bathroom sanitized? Are they wearing masks and sitting 6 feet apart? Nah. They’re chowing down on some exquisite pasta and sipping fine wine.

Anyway, back to my couch where Newsom wants me. Happy holidays California.