UNITED STATES—Following the certifying of the Electoral College Votes, Republican Senators Josh Hawley of Missouri, Ted Cruz of Texas and several others who rejected votes have faced threats and retaliation from Antifa, as well as from their fellow members of Congress.

According to reports, several Democratic and some Republican senators noted Hawley and Cruz should step down.

House Homeland Security Committee Chair and Democrat Bennie G. Thompson of Mississippi who is not a fan of President Donald Trump said that Hawley and Cruz should be put on a “no-fly list.” It was reported after the riot at the U.S. Capitol, some flights were denying supporters of President Trump to board. 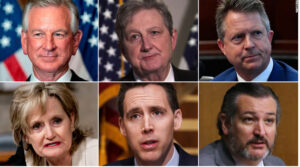 Senator Cruz led the group of senators who committed to rejecting the votes, a total of 12. Following incident at the Capitol building, 5 of the 12 backed down from their commitment.

Senators who objected to certifying votes in Arizona due to documented cases of voter fraud were included Cruz, Hawley, Cindy Hyde-Smith of Mississippi, Roger Marshall of Kansas, John Kennedy of Louisiana and Tommy Tuberville of Alabama.

Those who voted to certify the votes in Arizona included: Marsha Blackburn of Tennessee, Mike Braun of Indiana, Steve Daines of Montana, Bill Hagerty of Tennessee, Ron Johnson of Wisconsin, James Lankford of Oklahoma, Kelly Loeffler of Georgia, Cynthia Lummis of Wyoming, and Rick Scott of Florida.

“Hold states accountable to the time-proven constitutional system of the Electoral College. This is why I urge the formation of the electoral commission to give constructive suggestions and recommendations that states can make to make our elections once again safe, free and fair after a year of jarring irregularities,” said Senator Roger Marshall of Kansas.

Senators who objected to the votes in Pennsylvania include Cruz, Hawley, Smith, Lummis, Marshall, Scott and Tuberville.

“Tonight, while I was in Missouri, Antifa scumbags came to our place in Washington D.C. and threatened my wife and newborn daughter, who can’t travel,” Hawley wrote.

“They screamed threats, vandalized, and tried to pound open our door. Let me be clear: My family & I will not be intimidated by left-wing violence,” Hawley stated about an occurrence at his Vienna, Virginia home.