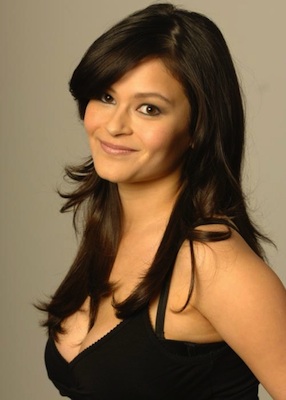 STUDIO CITY—Romi Dames is an exotic beauty whose career took off from childhood when she convinced her parents that she was made for the stage, TV and the silver screen. The talented young actress has made an indelible place in the minds and hearts of many of the Disney Channel’s viewers and their parents. She’s all grown up at this point and ready to tackle Hollywood.

Romi speaks exclusively with Canyon News about her upcoming projects, her life today and how she landed a role on Disney’s “Hannah Montana” opposite Miley Cyrus. Here is Romi in her own words.

Q-Romi, Have you enjoyed your run on “Hannah Montana,” and how was it working with budding star Miley Cyrus?

A-“Tommy, I loved every minute of being on ”˜Hannah Montana’! It’s been an incredible experience. When I auditioned for the role of Traci Van Horn, it was just supposed to be a small guest star role for one episode. The role grew within that debut episode and then they just kept calling me back in, season after season. It was an actor’s dream come true.”

Q-You also have been guest starring on many other TV shows. What are your goals for doing more TV? Do you also want to get into films?

A-“I would love to do both! Television is great because I really enjoy having the time to explore a character and figure out all their little quirks. I also like the job security that comes with TV, as opposed to film; it’s a very steady schedule and I like the comfort of knowing what I’ll be doing next week. On the other hand, film is fun because I love to keep switching it up. Ideally, I’ll get to do both. I actually have a film that I’m going to be shooting this winter called ‘Child P.O.W.’ It’s based on a true story about an American mother and a daughter who are taken by the Japanese as prisoners of war during WWII.”

Q-Where are you from and how did you get into acting?

A-“I’m originally from Japan. I was born on an American army base in Tokyo. I was nine when I saw that our base’s community theater was putting on a production of the musical ”˜Annie.’ Tommy, I begged my parents to take me to the audition. I was cast in the role of Molly, and ever since then I’ve been hooked. I moved to Seattle when I was 12, and the first thing I did was flip open the Yellow Pages and call every theater in town to ask, ”˜Do you have any parts for 12-year-olds that I could audition for?’”

Q-Are you married or dating?

A-“Yes, I am… married or dating.” [The beauty said laughingly].

Q-What do you like most about being an actress?

A-“The ride I get to go on with each character! I love experiencing situations and emotions I wouldn’t necessarily have, or want to have in real-life. I think every girl deep down wants to be a beautiful princess, or a strong yet tragic heroine, or a truly evil diva (a la Joan Collins). Being an actress is the way I get to do all of those things without any of the repercussions.”

Q-What upcoming projects can you tell us about?

A-“I’m always up to something! I’ve been doing voices on episodes of ”˜Phineas and Ferb’ as well as the new Disney animated series ‘Kick Buttowski.’ And then I’ll be shooting ”˜Child P.O.W.’ this winter.”

Q-For those who love you like I do, and want to know what is going on in your busy life, are you on Twitter?

A-I am! And I love chatting with new friends! My twitter is @TheRomiDames and I’m also on Facebook: facebook.com/RomiDames