MALIBU—California based architect Harry Gesner has listed his Malibu home for $14 million. The mansion known as the ‘Ravenseye’ was built in 1957 and appeared in the 2019 film, “Yesterday.” The 4,500 square foot home offers three bedrooms and three bathrooms.

According to the listing on Nicholas Property Group, the home boasts a unique arched doorway accompanied by a sweeping staircase that leads into the ultimate great room with approximately 30 feet high vaulted ceilings. 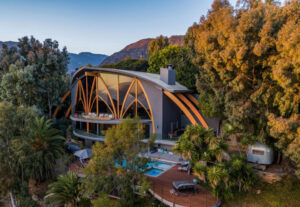 Through the walls of glass are views of the Pacific Ocean and the Malibu coastline. Other amenities of the home include a swimming pool, hot tub and various patios and terraces, nearly all of them with breathtaking ocean views. Regarded as a private escape, the property also features lush gardens that are walled in and surrounds the entire property.

Due to the location of the property, the home was hewn from stone masonry, designed to resist the wildfire flames.

The property also includes a 1957 Airstream trailer in pristine condition. It last sold in 2008 for about $3.9 million, according to public records. Since 2008, Gesner has been extensively upgraded the home, with a larger kitchen and redone windows.

Gesner was born in 1925 on April 28. After serving in the U.S. Army during World War II, he taught himself architecture. He studied under Frank Lloyd Wright at Taliesin Wes. His creation of the Wave House in 1957 was the inspiration behind the Sydney Opera House designed by Danish architect Jørn Utzon.