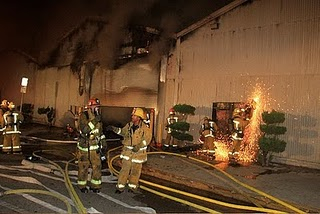 According to the LAFD Blog, a series of 9-1-1 calls were made to their department regarding “a one-story metal-clad commercial building with heavy smoke and fire showing [from it].” At approximately 10 p.m. that night, firefighters showed up to the 22,319-square-foot, smoke-filled building that was doing business as the C.P. Three Prop House.

Due to the intensity of the fire, additional firefighters were needed to assist in canceling out the blaze, which was located on the D-side of the 54-year-old building.

According to the LAFD report, “Truck companies remained [stationary] on the triple gable roof, and were able to continually evaluate smoke and ventilators to guide the firefighters [safely] inside the structure to the source of the fire.”

The incident lasted for about an hour and 22 minutes, involving a total of 91 firefighters.

As a result of the blaze, “no civilian or firefighter [injuries] were reported during [the] incident”; however, the amount of monetary damage done to the building’s structure is still being calculated by authorities. Motives behind the incident are still under “active investigation” as well, stated LAFD spokesman, Erik Scott.

For information regarding other fire-related incidents like this one occurring throughout the greater Los Angeles area, visit online at lafd.org or visit lafd.blogspot.com.