UNITED STATES—An Illinois judge has ordered “Empire,” star Jussie Smollett’s court records to be unsealed after filing a false police report with the Chicago Police Department portraying himself as a victim of a hate crime. Smollett reportedly hired two Nigerian bodybuilders to stage an attack against him to claim he was the victim, and they were wearing Make America Great Again hats and doused him with a liquid substance.

Smollett spoke about the crime in an interview with Robin Roberts on “Good Morning America.” He brought himself to tears recounting the racist, homophobic crime against him. He maintains his innocence in the case. Investigators recovered receipts at Smollett’s residence for the rope that was said to be used as a noose, and other items mentioned in the police report.

After several sources sought to have the case unsealed, Circuit Judge Steven Watkins made issued the following statement regarding a 10-page statement read aloud in court.

“These are not the actions of a person seeking to maintain his privacy or simply be left alone. While the court appreciates that Smollett was in the public eye before the events that precipitated this case, it was not necessary for him to address this so publicly and to such an extent. By doing so, the court cannot credit his privacy as a good cause to keep the records sealed,” said Watkins. 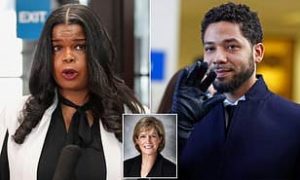 According to CW Chicago, a former Illinois Appellate Court Justice, Sheila O’Brien indicated she will personally petition the courts to appoint a special prosecutor to investigate Foxx’s handling of the case.

“The details of this case made me jump the couch and my conscience said, somebody, has to do something,” said Judge O’Brien to the Chicago Tribune. O’Brien added, “And I have time and a typewriter.”

Over 300 pages of court filings were released by the Cook County Attorney’s Office.