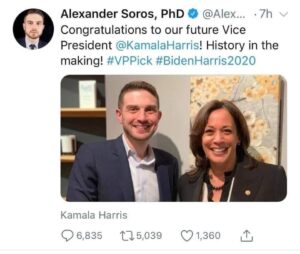 Alexander, in a recent NBC op-ed, THINK wrote, “My father, George Soros, is white supremacist’s favorite target. But they won’t stop us.” In his article, he shared his opinions that, “Mass protests being blamed on Jews is textbook white supremacy.”

“Consider this: My father was mentioned on Twitter with the protests 500,000 times a day in Late May and 68,746 times on Facebook throughout the month.”

According to reports, while Kamala Harris was California’s Attorney General, she refused to prosecute Mnuchin and Soros’ OneWest bank for fraud in 2013 without giving any reason. Foreclosure violations reportedly left thousands of homeowners with eviction notices. 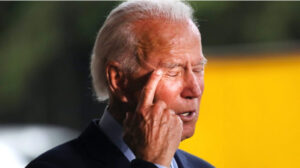 On social media sites suggestions were raised that Harris was the VP pick of George Soros and the Democratic Party, and that having California Senator, Harris as a running mate was not Biden’s choice.

Harris was elected as U.S. District Attorney of San Francisco in 2003. She was elected as Attorney General in of California 2010 and reelected in 2014. Harris served as Junior U.S. Senator since 2017.