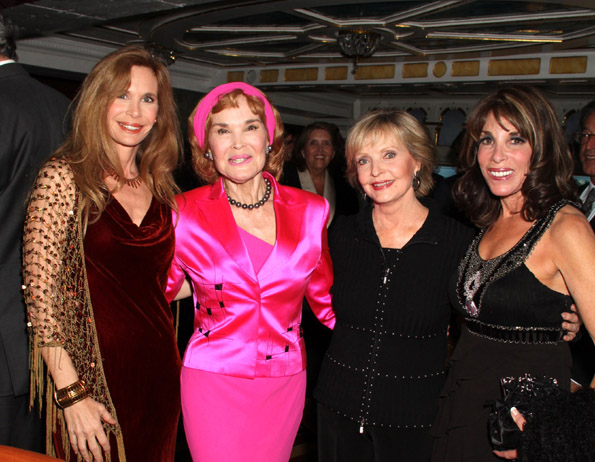 HOLLYWOOD—Kathryn Crosby’s “Life With Bing” with musical direction by Edward Sayegh is a delight. Unless you like classic songs of stage and screen and enjoy anecdotes about the famous and their lives during Hollywood and Broadway’s golden era, you won’t find Mrs. Crosby’s show very interesting. If however, you are like anyone in the audience at Cabaret at the Castle last week, then you were in for a treat. “I was so lucky to have enjoyed working with men like Fred Astaire, Bob Hope and my dear Bing. Often at the same time,” as she (Crosby) directs the audience attention to an image on the backstage screen. It was a pert, vivacious and absolutely stunning Mrs. Crosby that took center stage and regaled the patrons with stories and songs that made her and her contemporaries famous.

The former Kathryn Grant, known publicly as Kathryn Crosby, was born in the ”˜Deep South’ and appeared on stage from the age of 3. A graduate of the University of Texas and a student nurse at one point, she found her way into films via the beauty pageant circuit. The fresh-faced hopeful soon rose up through the standard starlet ranks from unbilled parts to chipper sis types and decorative love interests alongside filmdom’s top male stars. She appeared opposite Richard Kiley in “The Phenix City Story” (1955), Tony Curtis in “Mister Cory” (1957), Jack Lemmon in “Operation Mad Ball” (1957), James Stewart in “Anatomy of a Murder” (1959) and Victor Mature in “The Big Circus” (1959), among others.

Her best-known role, however, was as the princess-in-distress in the special effects laden epic fantasy “The 7th Voyage of Sinbad” (1958), which has since reached semi-cult status. However, Kathryn was unchallenged as an actress and retired after marrying singer Bing Crosby in 1957. They had three children, including actress Mary Crosby of “Dallas” fame. Who can forget “Who Shot JR?” She, along with her children, dutifully and to pleased audiences appeared opposite her husband singing and lightly joking in his many popular Christmas-special presentations and even hosted a couple of syndicated TV series. After Bing’s death in 1977, however, she slowly involved herself in acting again, appearing every now and then on stage in such productions as “Same Time, Next Year,” “Charley’s Aunt” and, most recently, a revival of the musical “State Fair” in 1996. In addition to authoring two sets of memoirs (“Bing and Other Things” and “My Life with Bing”), Kathryn now offers lucky patrons a glimpse into a life filled with all the glittering Hollywood glamour that many Americans can only dream about.