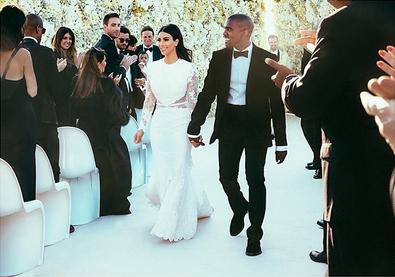 FLORENCE-Kim Kardashian posted pictures from her wedding extravaganza onto her Instagram page on Tuesday, May 27. The media has been left abuzz for weeks, watching the newly wedded Kardashian prep for her big day; and it was no wonder why.

Since Kanye West’s dramatic proposal was met with a yes in October 2013, people patiently awaited for the wedding day. Mrs. West posted hints and clips of the wedding to come, keeping her fans up to date with her wedding preparations. On May 13, Kim posted a photo to her Instagram of herself against a backdrop of white roses. Not all of the attention surrounding the couples’ nuptials retained a positive air.

On Kim Kardashian’s website, she posted a not-so-flattering magazine article that chose to make a photo recreation of Kim’s wedding dress troubles claiming the dress didn’t fit. Kim remarked that it was “it’s pretty unbelievable what people will do to sell a magazine.”

John Legend reportedly played his heart-warming single “All of Me” for the lovely couple at their reception, according to E! News online.

According to reports, members of the Kardashian family flew from Florence to Los Angeles on Sunday to resume everyday life after the happy occasion.