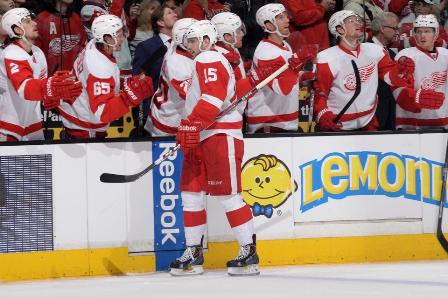 LOS ANGELES— Detroit’s one chance at beating the Kings on the road came huge for their three-game sweep out west. In what looked to be a Kings rush early in the first led to a complete change of control for the remainder of the game, as the Red Wings scored three unanswered to win 3-1 at the StaplesCenter Saturday night. Detroit’s youthful led the team to its first win in over a week.

The Kings 4-2 win over Boston two nights ago led some to believe that the Atlantic Division was less than to be expected. At the start of the game the Kings opened ahead of the Red Wings taking the game early in front of netminder Jimmy Howard who earned the nod to start. His tenacity along with Detroit’s tight defense in front could only last so long as mistakes piled up for the Kings to work on. A five-on-three power play gave Los Angeles the green light to score first. The Kings put on a pass play that frustrated Detroitlate in the period for Drew Doughty’s drive to find the back of the net and record his seventh of the season.

The LA goal would not go unanswered as Riley Sheahan, who was called up from AHL Grand Rapids two days ago evened up the period at one. TheDetroit center scored just three minutes later on a backhanding rebound off the pad of Jonathan Quick to give him his first NHL goal in seven games.Detroit began to see their youth make a name for each other as the team dealt with the loss of Pavel Datsyuk, Daniel Alfredsson and Johan Franzen from Saturday’s starting roster. The late Red Wings comeback left them slightly outshot 10-9 by the Kings, but not out of the game.

The Kings opened the second with a barrage of shots on Howard once again, that the veteran goaltender handled successfully. His focus compared to Friday’s 4-1 loss to San Jose was on a much higher level. The Kings handed numerous power plays in the period that Detroit failed to score on, but made time with the puck in the Los Angeles zone matter more. The pace continued to fall in Detroit’s favor leaving them with a good chance at breaking the tie.Detroit outshot the Kings 25-18 for 40 minutes.

Los Angeles came out in the third and gave it all on Howard. The Kings objective went unanswered as Detroit looked to their young ones on the third line to handle the offense. The lead was gained 12  minutes in with Tomas Tatar scoring his tenth of the season as Sheahan and Todd Bertuzzi kept Quick busy on the stick side; that left the net wide open for Tatar to break the tie. Time quickly began to run out for the Kings as Daniel Cleary etched his name to the scoreboard for his fourth on the year with a wrister from the short end giving Detroit rookie Luke Glendening his third assist and a two-game points streak.

LA made one last chance to cover the margin pulling Quick in the last two and a half minutes of regulation. It wouldn’t be enough as Detroit took the Kings offense down a few notches to win a very important game on the road. Quick ended the night making 23 saves in his sixth loss of the season while his adversary who was also named to Team USA hockey stopped 44 shots to tie a season high from two nights ago against Dallas. While the Kings rest up against Vancouver Monday night, the Red Wings head south to visit a surgingAnaheim squad who sits on a six game winning streak Sunday.