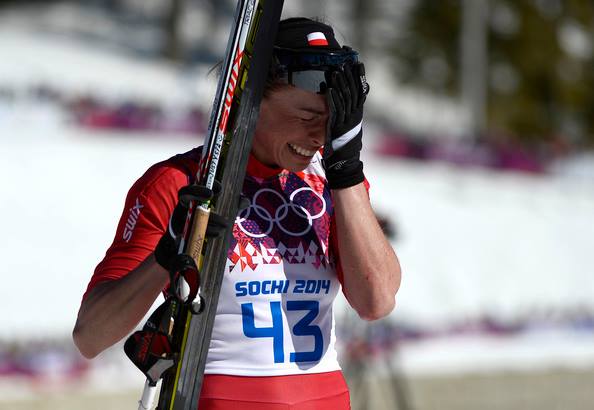 SOCHI, RUSSIA— Poland’s most popular winter athlete finished on top where she deserved to be. After finishing sixth in the skiathlon, the 31-year-old from southern Poland captured her first gold medal of the Sochi games, winning the ladies’ 10km Classic in Cross Country skiing. Her time of 28:17.8 held off defending Olympic champion Charlotte Kalla, of Sweden, by 18 seconds. Norwegian Therese Johaug took home the bronze, finishing 10 seconds later. It became the second career gold medal and fifth combined for Kowalczyk since her Olympic debut in 2006.

China’s Hongxue Li was out of the gate first in the six-mile race that consisted of three laps around the snowy track ending in the stadium that was attended by thousands on Thursday afternoon. Russia had their hopes on the shoulders of Natalia Zhukova who was out on the track 10 minutes into the race. Zhukova kept a short distance with the top 20, but couldn’t gain any ground on the main lead pack with Kowalczyk leading after the first lap and only increasing the time differential as the event went on. Kalla remained by the Polish cross country skier as she was trying to become a repeat champion in the event after taking home gold in Vancouver.

Norway was another big competitor in the event as they vied to keep a streak alive by medaling in every cross country event in the Olympics. Their money was on Marit Bjorgen and Johaug as both have reputations to grow and continue as Bjorgen took bronze in 2010 hoping to finish better. Nothing and no one was going to stop Kowalczyk despite her broken left foot that she had been competing with ever since the injury last month. “I felt an ache in my foot, but I overcame it,” Kowalczyk said. “We knew what we were here for. It was unlucky that it happened to me. Everything was going wrong, but I am not one of these people who give up.”

In a show of strength and adversity through all the pain, Kowalzcyk made it to the finish four minutes slower than what was posted in Vancouver, but with an 18-second lead; the possibility of anyone catching her was slim to none. She became the most decorated Polish winter athlete, ahead of ski jumper Adam Malysz.

The unusual temperatures felt in the snow-filled areas away from the city were playing a huge role for her rivals. “I think it’s one of the toughest races I’ve ever done,” said Kalla. “It’s altitude and it’s hot and wet. I didn’t feel I had the best speed, but it was the same for everyone.” American Sophie Caldwell who was a finalist in the women’s sprint started thirteenth, but finished 32nd having the same feelings about the conditions. “The conditions are pretty crazy,” she said. “It’s definitely the warmest and softest I’ve skied in a long time.”

The gold medalist proved that she could overcome any obstacle put in front of her, and perform at her best. “I think it was the hardest 10K of my life, especially the last big uphill,” she said. “I was fighting with my body. In the last 30 meters I was almost walking. I was so tired.” She may feel the same way when she again goes for an individual mass start next weekend.