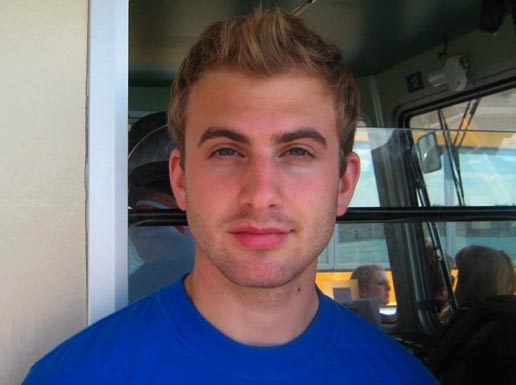 MALIBU—A few weeks ago I had the opportunity to meet a musical genius in Malibu at a very elegant restaurant. Many young people come to Hollywood with hopes and dreams of becoming famous, and few come as talented as Kyle Peter Rotolo, who was born in Palisades Park, N.J., just across the Hudson River from the City that never sleeps. He began playing guitar at age 12 and started writing songs not long after that. He graduated magna cum laude from Pepperdine University where he studied composition with Dr. N. Lincoln Hanks. Kyle is a member of Phi Kappa Lamda National Music Honor Society and was named to the Spring 2009 edition of Who’s Who in American Universities and Colleges. Thanks to his friends, his music has been played on two continents and has received overwhelming support from such admired musicians as Christopher Parkening. He draws inspiration from Woody Allen, pasta and rainy days. Putting an education first, this young man helps prove he has what it takes to make it in a touch industry.

Q- Kyle, You have loved music all of your young life. Which composer inspired you to begin?

A-“Music has always been deeply fascinating for me, even arresting at times. When I was very young, I used to hear music and be enthralled by it, but I never believed that I could make it come out of me the same way. I mean, it was just too far beyond my comprehension! Then, around the time my parents gave me my first guitar, I heard Billie Joe Armstrong from Green Day playing these awesome power chord progressions and singing his sarcastically clever lyrics. It was simple, yet totally profound, even elegant in a sense, and I thought ”˜Well, I can do THAT!’ Even though my musical palette has expanded greatly since I first started writing, Billie, along with Mike and Tre from Green Day still have a huge influence on the way I approach composing.”

Q- How long have you been performing professionally?

A-“It’s been about nine years since I started seriously gigging. I really started performing heavily when I was in high school. My band used to be asked to play at the town carnivals or Octoberfests. I did many acoustic solo gigs on my own, seeking out every coffeehouse open mic that I could, sharing my songs. There is this blues club back home in Jersey called ”˜Mexicali Blues’ where I used to go play open mic blues jams with some amazing players [and basically get played off the stage!]. I take every performing opportunity that I can, be it in classical music or another genre, because every new gig exposes me to a different side of the music world and I want to amass the largest figurative collection of musical experiences that I can.”

Q- What is your longtime goal professionally?

A-“Many people think that when you devote your life to your art and strive to make a career of it, you are attempting to live a pipe dream that most likely will never come. I do not believe that to be true. Christopher Parkening, a musician of awe-inspiring talent and one of the humblest men I have the privilege of knowing, has a saying: ‘Success seeks status, power, prestige, wealth and privilege. Excellence is internal – seeking satisfaction in having done your best.’ In my professional life, I aim to be excellent in whatever endeavor I pursue, whether it is writing chamber music, orchestral works, scoring films, creating Broadway musicals and operas, or even writing rock songs in my bedroom like I used to do when I was 16, and I hope that someday I will have done all of these things at least once. I also want to write music that is relevant to society and the times we live in, not just in the musical world. I believe that will make my music last, even if it is for a fleeting moment. Ultimately, my goal is to keep an open mind, an appetite for learning, and ”˜Carpe Diem,’ so to speak.”

Q- If you could have one [living] and one [deceased] performer in music attend your show, who would it be?

A-“After thinking about this question for about two hours without a shred of an answer coming to me, I have decided that it is impossible to answer. How can I invite Hildegard von Bingen or Giovanni Pierluigi da Palestrina to my concert without feeling like I have done an injustice to Arnold Schoenberg? I’m pretty sure Igor Stravinsky would decline to attend without being assured that Johann Sebastian Bach would also be coming. George Gershwin would definitely be on the list, and if he came, I’d be willing to bet John Lennon and George Harrison would find a way to sneak in the back door, even though they wouldn’t have to. Aaron Copland would be given a backstage pass, but so would John Cage and Morton Feldman. And Mozart?! I hope he could make it with his busy schedule as Heaven’s composer-in-residence. But I guess all of these musicians are present at a performance of my music, because they have all left an indelible mark on it.”

“As for one living performer I would have attend, I want the kid who just started playing trumpet in his school band to be in attendance; one of those who has just fallen in love with music but doesn’t have the opportunity to gain perspective on it. Myself, along with composer Damjan Rakonjac and soprano Roksana Zeinapur, founded the Music On Argyle music series in part because we believe that classical music should not be reserved only for those who can afford to experience it, but then again, we don’t write classical music, or pop music, or rock music. We write our music, and it is available to anyone with the heart and mind to listen to it.”

Q- You have some upcoming shows, when and where can you be seen and heard?

A-“There are several upcoming performances of my music. Firstly, Music On Argyle Kickoff Jam! Friday, March 12, at 8:30 pm. 2041 Argyle Ave. in Hollywood. A program of new guitar, flute, piano, & vocal music by L.A. renegades ”˜Kyle Peter Rotolo, Juan Pable Contreras,’ and ”˜Damjan Rakonjac.’ Admission is $5. Then, I have ”˜Anastasios Comenescu’ and ”˜Austin Grant Guitar Duo Tour.’ Friday, March 5, at 7 p.m. San Jose State University. A piece entitled ”˜Sisyphusica’ on a program of Halfter, de Falla, and others.  Also, ”˜Anastasios Comenescu’ in Recital. Saturday, April 10, at 5 p.m. Raitt Recital Hall at Pepperdine University: 24255 Pacific Coast Highway in Malibu. A piece entitled ”˜The Skull with a Burning Cigarette’ on a program of guitar works by John Dowland, J.S. Bach, and others.”

FOR MORE INFORMATION ON KYLE, HIS MUSIC, AND UPCOMING PERFORMANCES, please visit