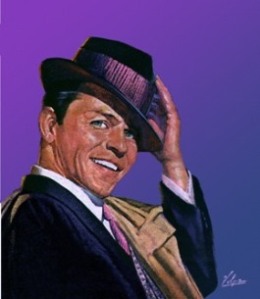 “Come Swing with Me” features a stellar array of vocalists, composers, lyricists and musical associates who were integral parts of the Sinatra legacy, including The Nelson Riddle Orchestra, The Johnny Mandel Orchestra, The Pied Pipers, The Ray Anthony Big Band, Steve Lippia, Frankie Randall, Plas Johnson, Mike Melvoin and Michael Andrew. Plus an all-star Rat Pack celebration including Deana Martin performing a special tribute to her father and many more.

As an added bonus, VIP ticket holders are being treated to an exclusive party and concert at Sinatra’s Twin Palms Estate in Palm Springs on October 20. This is the famous house Ol’ Blue Eyes lived in between 1947 to 1954 where he played host to the Hollywood elite at his legendary parties. Frequent visitors included the likes of Jimmy Van Heusen, Bob Hope, Joan Crawford, Phil Silvers, Lana Turner, Bogart and Bacall, Jack Benny, Sammy Cahn and many more. It’s also the site of his well-publicized romance, marriage and heartbreak with Ava Gardner.

“I came here in 1987 from Kansas City to work at the jazz radio station which was KLON. I was an on air host and Director of Concert Productions. We produced many jazz and blues concerts throughout the year including The Long Beach Blues Festival. I was there until 1999 when I became Director of the Jazz Institute,” said Ken Poston. “The events we do are unique because it’s much more than just a series of concerts. Each concert is created from scratch with great care to track down the music, hire the right musicians and choose the right vocalist.”

Kurt Reichenbach, who will be singing Sinatra’s tunes, tells Canyon News, “I have been performing comedy since high school, but began my singing career in 2004. However, this is my first performance at a LA Jazz Institute festival. Can’t wait!” Asked what Sinatra’s music means to him, he responds, “Sinatra is one of my earliest musical memories. My mom met one of Sinatra’s vocal coaches when my dad was with the Tommy Dorsey band and he wanted to place her as a big band singer, but she elected to stay home and rear a family. Two of Sinatra’s early Capitol albums played often at our house, and I knew all the songs by heart when I was 5 or 6.”

The Los Angeles Jazz Institute houses and maintains one of the largest jazz archives in the world with an emphasis on the preservation and documentation of jazz in Southern California. The Institute actively uses the materials in the archive by maintaining a busy schedule of activities including the production of two major jazz festivals each year, as well as The Los Angeles Jazz Orchestra, The Collegiate Neophonic Orchestra of Southern California, JazzWest Radio Productions and The Lighthouse Record Company.

“Come Swing With Me” is the 19th multi-day jazz festival produced by the Los Angeles Jazz Institute since 2000. Find full details about the festival, program lineup and Jazz Institute at lajazzinstitute.org.