iff’s Station at the time. 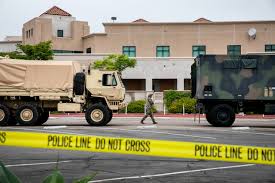 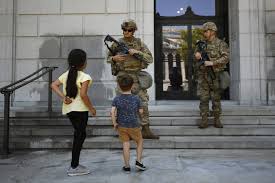 They may also “[hold] a stationary post when there may be imminent threats to critical infrastructure such as the West Hollywood Sheriff’s Station and our local Fire Stations.”

The presence of the National Guard allows the local station to “maximize personnel in the field.”

Governor Gavin Newsom moved the National Guard to Los Angeles County on May 30 in response to the proclaimed state of emergency in Los Angeles County. Businesses in Beverly Hills, Santa Monica, and Fairfax Avenue were looted and destroyed.

It was the fourth day in a row of protests in Los Angeles. Earlier that day, Black Lives Matter Los Angeles and BLD PWR scheduled a rally at Pan Pacific Park. According to BLM-LA’s Twitter, it was “in the name of #GeorgeFloyd in Minneapolis and in LA.”

As of Saturday, June 6, the National Guard has not yet left the area.