WOODLAND HILLS—Walmart Inc. will no longer be sell firearms, ammunition, and spray paint in some of its stores as a result of nationwide protests over the murder of George Floyd. 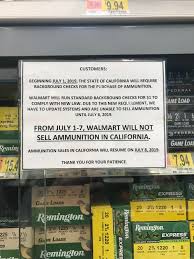 In a statement on Wednesday, June 3, Walmart said:

“We have temporarily removed firearms and ammunition from the sales floor in some stores out of an abundance of caution.”

In some stores, firearms and ammunition will still be available to purchase, but they will not be on the sales floor. Walmart noted it will store such items in a secure room.

In September 2019, Walmart discontinued the sale of handgun ammunition and requested  customers refrain from carrying firearms in its stores after a shooting took place at on of its stores.

In a statement, Walmart CEO and President Doug McMillon stated:

“Let me say clearly to our Black and African American associates and communities: We hear you. We see you. You are valued and loved members of our family.”

Walmart and the Walmart Foundation announced that they will donate $100 million over five years through a new center on racial equality. The center will focus on philanthropic initiatives related to America’s financial, healthcare, education and criminal justice systems.