On July 7, at approximately 1:45 p.m. a total of six suspects walked into a business on 8400 block of Melrose Place in West Hollywood. The suspects entered the store and began taking purses off of the shelves. Store employees attempted to stop the individuals, but were promptly pushed out of the way, “with force.” 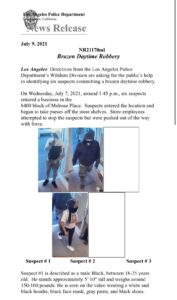 Suspect #1 was described as a Black male between 18-25 years old, approximately 5 feet and 10 inches tall, and weighing 150-160 pounds. He is seen on video wearing a black and white hoodie with the white hood  up, a black face mask, gray sweatpants, and black shoes.

Suspect #2 is described as a Black male between 18-25 years of age. He stands approximately 6 feet tall and weighs approximately 180-190 pounds. He was wearing a dark brown hoodie with white underneath, a dark-colored face mask, camouflage pants, and black shoes. 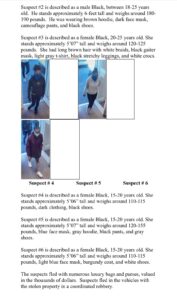 Suspect #4 is a Black female 15-20 years of age. She was approximately 5 feet and 6 inches tall and weighed around 100-115 pounds. She was wearing a black hoodie with a florescent green insignia on the front, black pants, and black shoes, with a royal blue face mask. She had a ponytail that was brushed out.

Suspect #5 is a Black female 15-20 years of age. She was approximately 5 feet and 7 inches tall and weighs around 120-150 pounds. She had her hair in a bun on top of her head, a royal blue face mask, and was wearing a light gray hoodie, black pants, and gray shoes.

Suspect #6 us described as a Black female 15-20 years of age standing approximately 5 feet and 6 inches tall. She weighs around 100-115 pounds. She had her hair in a bun, was wearing a blue disposable face mask, a burgundy hoodie, shorts, and white athletic shoes. 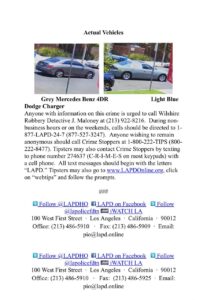 The suspects fled with  luxury bags and purses valued at thousands of dollars. The perpetrators fled the scene in vehicles in what authorities coined a “coordinated robbery.”