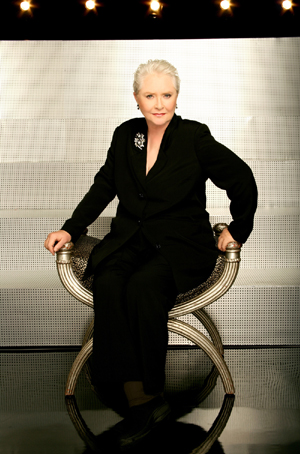 HOLLYWOOD—This week’s Leading Ladies Gold Standard goes to three beautiful actresses, who portray women who have been involved with each other’s private lives and mistakes for decades. Susan Flannery, who plays Stephanie Forrester on CBS’s “The Bold and the Beautiful,” and her two costars Hunter Tylo (Taylor) and Katherine Kelly Lang (Brooke Logan), all had a fantastic week as women who once were friends, but consider their friendship over. Flannery, Tylo and Lang know the art of keeping the storyline fresh and how to keep their feud going strong.

Susan Flannery, who portrays Stephanie Forrester, learned last week that Brooke shared a kiss with her stepson Thomas, who just happens to also be Stephanie’s grandson. Months earlier Brooke and Stephanie decided to put their long running feud aside so Stephanie could battle stage four lung and brain cancer. Brooke even helped her mother-in-law by forcing her to confide her illness with family members and also to seek radical treatment. Stephanie began to let the anger she had against Brooke subside. However, on Monday’s episode, it was incredible seeing Susan play Stephanie as a woman who was battling her inner rage to lash out at Brooke. Flannery is a four-time Emmy-winner and a Golden Globe winner. As an actress, she simply is the best.

Hunter Tylo’s performance this week as Taylor was dazzling. Seeing Taylor as the neurotic woman, hovering over her best friend and former mother-in-law Stephanie, while giving her psychiatric terms which describe their common enemy Brooke is so much fun to watch. Taylor has lost several men to Brooke Logan, and she now fears her son Thomas is becoming infatuated with the valley tramp. Tylo manages to play the nervous and frustrated mother and ex-wife of men who are obsessed with the sexiest woman in the world with such a realism that it’s as if she’s in our living rooms discussing it.

Kelly Lang knows how to play the victim even though Brooke is considered a sexual predator by Taylor and Stephanie. This week her heartbreak as the truce between her and Stephanie finally broke down was so entertaining to watch. Lang went from despair and heartbreak, to resignation of the destiny she will face and ultimately her defiance as a woman who feels wrongly accused of being a temptress. There’s a fine line between being a slut and a heroine in soaps. Lang walks right up to the line, but then pulls back brilliantly, in order to make fans actually empathize and not despise Brooke Logan.