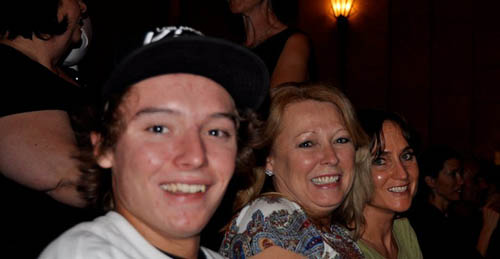 HOLLWOOD—HELLO AMERICA! I must admit that I have been one of those critics who without a second thought put down the music and carefree life of many of the new young artists who are quickly boasted as saviors of the new world’s creative stage. After all I was still enamored of Frank Sinatra, Sammy Davis Jr, Vic Demone, Johnny Mathis and you can imagine all the rest. As a result I decided to meet some of these young people who are making their presence known in some of our small and big music bars around the country.

Embarking on this journey I was astounded by what I discovered.  Most of the young musicians I spoke with were extremely knowledgeable about music and how they needed to present their ideas. Not only were most of these young people able to play more than one instrument but they were into writing their lyrics and composing much of the music they performed. They prided themselves in being self-contained ”“ not dependent on anyone else to produce the music for which they had passion. One of these gifted young musicians I spoke with is TAYLOR ROBINSON who didn’t hesitate to explain what he is all about.

Q: When you were a small kid, what kind of music affected you the most? And did you hear it on radio or TV?

A: I listened to a very WIDE variety of music as a kid. I remember listening to Eminem in first grade. I was also was introduced to a lot of other rap music around that age because I grew up the youngest of 5. Some of the other artists I can remember were Westside Connection, Sublime and even Blink 182. Honestly, I listened to a lot of pop music/pop-punk music including Blink 182 and New Found Glory. People may talk down on me for that, but I’m not ashamed of it.

Q: As a teenager, who were some of your musical idols and why?

A: As a teenager I listened to pretty much all underground hip hop artists. Some of those included Atmosphere, Sage Francis, Mac Lethal, Immortal Technique, Living Legends, People Under the Stairs, Binary Star and lots of Wu-Tang Clan. There were so many others that I could go on for days. I think I found myself listening to these artists more than the commercial stuff was because it was so real. The lyrics were vivid, great story telling and simply relateable. My brother Shane showed me a lot of West Coast artists including West Side Connection, Dr. Dre, Snoop Dogg and many others.

Q: When did you discover that music was something you could not be without?

A: I think around third grade I figured that out. I didn’t get very serious about it until I was about 14 and recorded my first song at 15. From that point on I’ve been writing off and on non stop and playing shows whenever I get a chance. I don’t see myself stopping anytime soon.

Q: When you are composing your songs what kinds of things determine the kind of story you tell with your music? Is it politics, world drama or just surviving from day to day?

A: I think that it ranges from all those aspects. Politics aren’t on the top of my list but it definitely has something to do with the lyrics I write. But I’d have to say my music mainly deals with surviving day to day.

Q: Are you satisfied with who you are today as an artist and why?

A: I’m very satisfied with who I am today. I have done many things I am ashamed of but if I didn’t do those things growing up I wouldn’t be the person I am today.

Q: How far do you really want to go with your music? Do you want to be recognized as a “single” performer or do you have plans to be a part of a band or do you have an interest in creating one?

Q: What do you hope people will learn from your music?

Q: At this point in your life when you’re at home alone and you look in the mirror what do you see?

A: I see myself. And nothing but that. I love what I have become. And I wouldn’t be that if it wasn’t for my family. They are where my heart is.