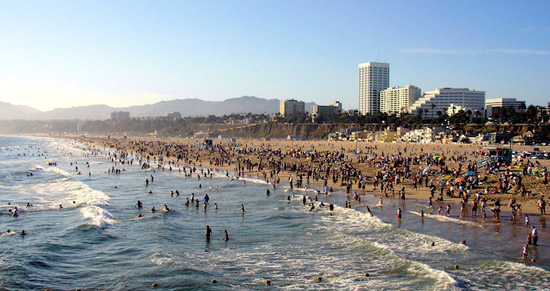 SANTA MONICA —On May 4, a Los Angeles man who allegedly led police on a high-speed car chase has been charged with multiple felonies, according to the Los Angeles District Attorney’s Office.

The chase occurred on May 1, in the West Los Angeles and Beverly Hills areas, and ended when the suspect abandoned the vehicle to jump into the ocean at the Santa Monica Pier.

The incident began at approximately 11:30 p.m., when police received a report of a man driving while under the influence of alcohol. The suspect was reportedly driving a stolen black 2010 Range Rover.

Gerjuan Deshon Harmon, 27, was apprehended at around 1:40 a.m. Believed to be suicidal at the time of the chase, Harmon was arrested and taken to the Santa Monica-UCLA Medical Center to be treated for minor injuries.

Harmon is also suspected of burglarizing two UCLA dorm rooms before the pursuit, and has had several prior burglary convictions. He was charged in case SA074269 with two counts of first-degree burglary, one count of car theft and one count of felony evading police. He is currently being held on $265,000 bail.

7 Wagering Tips To Follow For The Preakness Stakes Betting 2022