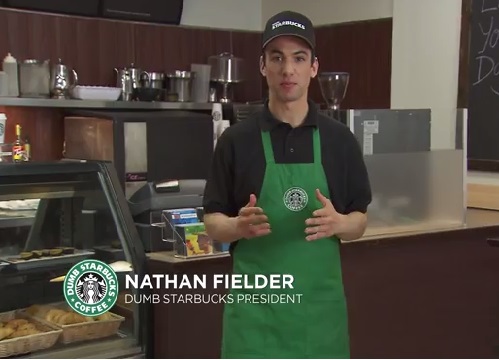 LOS FELIZ—Startled members of the Los Feliz community waited in long lines for hours with hopes of seeing the new parody coffee establishment “Dumb Starbucks Coffee.” Loyal consumers of Starbucks were flummoxed to see the opening of Dumb Starbucks on Friday morning, February 7; though as surprising as the new franchise was, people were left in the dark as to who was responsible for the establishment.

To clear up the confusion, comedian Nathan Fielder, who stars on Comedy Central’s “Nathan For You,” announced on Monday, February 10 that he was responsible for the new establishment.

On Fielder’s show, “Nathan For You,” he typically found himself helping other businesses; but with the parody law, he saw an opportunity that was too difficult to pass up. The business is in no way associated with Starbucks; however, its use of the same names, design and prices has caused some controversy. In response to Fielder’s joke franchise, Starbucks was not amused with the use of their protected trademark.

According to an interview conducted by USA Today, University of Notre Dame Law Professor, Mark Mckenna, said, “a court would be bothered by how much of the Starbucks trademark was used. It’s not just the word, but they also made the store look just like it.”

The unusual store located at 1802 Hillhurst Ave. in Los Angeles shocked a lot of customers and many wondered how the independent shop was able to piggyback off of Starbucks’s well known logo. Fielder explains that due to a parody law, he was able to legally use Starbucks’s logo to promote his shop.

On Monday, during Fielder’s introduction as well as his announcement of opening another Dumb Starbucks in Brooklyn, New York, the health department visited his shop and cited several problems forcing him to close down the business.

ABC’s Jimmy Kimmel, the host of Jimmy Kimmel Live! managed to get a hold of Fielder to discuss his business. Fielder told Kimmel that when the health inspectors arrived they cited several problems with his establishment, but Fielder claimed that the business was more of an art gallery than an actual coffee shop. Despite the claims, the health department is citing Fielder for problems that could leave him in jail for up to six months, inspiring Fielder to be very cordial with them in an attempt to evade jail time.

During Fielder’s interview with Kimmel, he brought in various items from Dumb Starbucks, which Kimmel pointed out were in Vons packing. Fielder confessed that the items they used in the store were indeed from Vons, and they purchased whatever coffee was on sale at the local Ralphs. In his promotional commercial, Fielder told potential customers to pick up their free Dumb Starbucks coffee saying, “Nathan sent you.”