UNITED STATES−New details have emerged in the case involving Breonna Taylor, 26, who was fatally shot by officers from the Louisville Police Department on March 13 was never seen by police. Taylor was killed after someone inside the house fired through a closed door hitting and injuring a police officer. Fire was returned. Authorities were executing a search warrant at her apartment. It was falsely reported that the police raid occurred without a warrant and the LPD were at the wrong house at the time of the shooting calling it a “unwarranted raid for a subject who was already in police custody.” 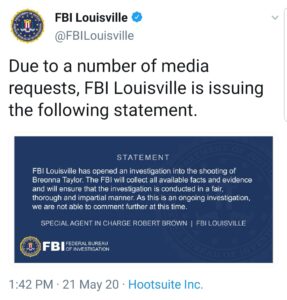 Taylor was employed by Louisville Metro Emergency services worked as an EMT for two area hospitals. Black Lives Matter protesters marched and spray painted her name on federal buildings across the U.S. citing the injustice Taylor’s death inside home because of the color of her skin.

YouTube footage indicates that Kenneth Walker, 27, was arrested for the attempted murder of a police officer. According to reports, her boyfriend was to start a new career with the postal service. Kenneth’s father relayed that his son was not a drug dealer and was only trying to protect his girlfriend.

The case is being investigated by the FBI. Officers are being incorrectly being blamed by political leaders including Michelle Obama, Kamala Harris, and protestors who are calling for justice for Taylor who they falsely accuse the police officers of murder.

Officers did have a warrant for Walker who the police had reason to believe was dealing drugs. He opened fire first, shooting and injuring officer, John Mattingly, who required surgery. Taylor was shot in the crossfire.

California Senator Kamala Harris and Lucy McBath of Georgia requested an investigation of any pattern or practice of constitutional violations of the Louisville Police Department. No-Knock search warrants are reportedly being banned. Harris stated that she too would be sending the police around to collect guns. “You would give up your guns or go to jail,” said Harris.