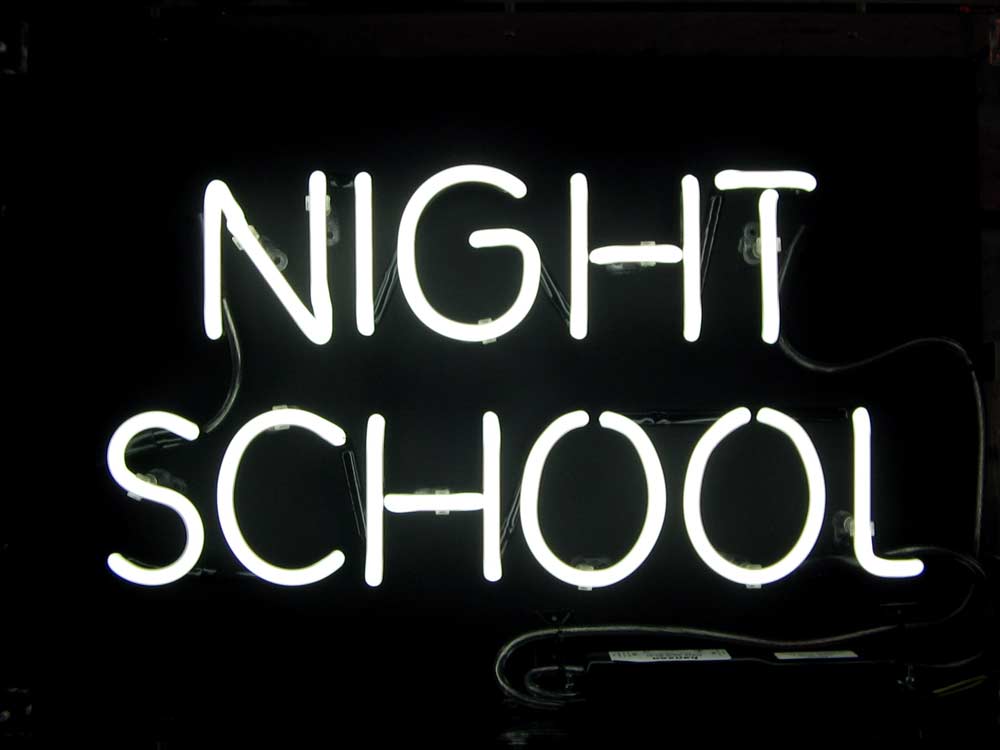 HOLLYWOOD—“Please excuse the interruption,” said a Voice from the Sky, a spacy, soothing female voice. “There is a white Mazda pick-up, license plate 3 FZH 809 blocking a fire lane. Please move your car immediately or it will be towed away.”

A soft syncopation broke the rhythm as the dancers on the classroom floor, shimmying to reggaeton and salsa, paused to listen to the license plate number. A moment transpired before the information was translated into Spanish. The one who cocked his ear longest froze midstep, he broke into a run out the door after hearing the plate number. Juventino had paint-flecked eyebrows and a fading web of crude jailhouse tattoos on his dark-brown arms, criss-crossed by rivulets of sheeny scar flesh.

Pizza, pupusas and posole — culinary ambassadors for the United States, Mexico and El Salvador — seduced the gathering. Empty pizza boxes were piled up, two canisters of hot chocolate were drained and the flan was a hit, leaving a lonely battalion of soda bottles and a full regiment of untouched cakes. The class Romeo bumped and grinded with the nerdy girl wearing glasses. Clusters of seated students spoke Spanish with a breathless zeal that contradicted they may have ever come to night school with the express purpose of learning a new language.

The loudspeaker in the corner scratched twice, preparatory to an encore of the Voice from the Sky. “Please excuse the interruption,” said the soothing, spacy voice again. “Please leave your garbage in front of your classrooms in the Hefty bags provided. Thanks to both students and teachers, and may you all have a happy and sober holiday season.”

Unbeknownst to the speaker, the mike hadn’t been switched off and continued to broadcast a new voice that boomed throughout the night school campus: “Hey baby, how ’bout another margarita!!!”

The clock gulped a full minute at a time, accompanied by that sharp click renowned to generations of California schoolchildren. The minute hand jerked forward in its stealthy approach to 9 p.m. All eyes, including the beginning teacher Mr. Finch, who had yet to learn how to dissemble watching the clock, fixed on that time-marking Cyclops eye at the fore of classroom 39. In seconds, the used paper plates and cups vanished, the sound equipment was whisked away, and there remained for a few moments the party’s sole vestige, a shallow brown pool of spilled Coca-Cola on the floor in which a stray candy cane appeared to float. The students — adults from 18 to 58 — hoisted their backpacks and fled for a three-week vacation, amid a flurry of good wishes.

“What happened to Juventino?” one of the departing men asked, a grave man from Honduras who always made a point to shake Mr. Finch’s hand and thank him for giving the class.

“There are his book and backpack,” the man pointed.

Mr. Finch went over and picked them up and put them into a file cabinet for safekeeping. After the last student left, he surveyed the scene for any further messes to pick up, lest he incur the wrath of the daytime teacher who already hated his guts. Finch pocketed a Christmas card signed by students who revealed, despite egregious errors of English that betrayed how poor an instructor was Mr. Finch, true sentiments: a bounty of thanks and heartfelt gratitude, “Mr. Finch, thank for everiting.” He opened the magical card and out spilled a tidal wave of cheers and applause. It would cheer up his cheerless one-bedroom apartment in Hollywood; moments of dreariness dispelled. Applause and cheers — music to his hungry actor’s heart. In the midst of a post-class tipsiness, he’d glance at those ungrammatical chicken scratchings in the card’s interior and feel a tug on his heart, a split-second of remorse for the deep disdain he felt for his arbitrary profession.

“Merry Christmas,” he’d muttered robotically to the exiting stream of students. “Have a great holiday!”