According to The White House website, only half of the veterans that qualify to have their federal student loans discharged have received relief by eliminating their entire student loan debt. 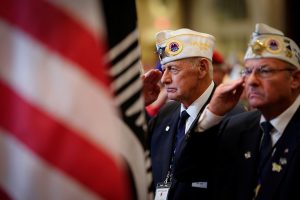 The Executive Order will amount $750 million and assist approximately 25,000 disabled veterans who previously qualified, but were not relieved of their debt.

The Secretary of Education and Veterans Affairs will be expected to develop a new, better, expedited process to aid those who are permanently disabled obtain relief and be discharged from repaying federal student loans.

President Trump received applause as he announced the forgiven debt to a crowd of over 2,000 people in Louisville, Kentucky at the American Veterans National Convention on Wednesday, August 21.

“Today I’m proud to announce that I’m taking executive action to ensure that our wounded warriors are not saddled with mountains of student debt,” said President Trump.

The new executive order joins a previous bill President Trump signed into law in 2017, the Forever GI Bill. That bill allowed individuals the ability to access their veterans educational benefits at any time during their life.