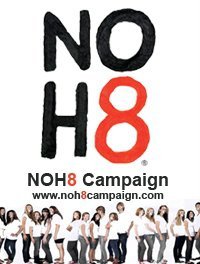 Participants of the photo shoot were asked to wear a white t-shirt and pay a fee for either single or group shots. The duct tape was provided. Once there, the “NOH8” logo was printed on their cheek with a temporary tattoo, a signature of Bouska’s photographs.

According to the campaign’s official website, the main purpose of the NOH8 Campaign is to speak out against the same-sex marriage ban and raise awareness for the cause. Funds collected at the event will be used to continue hosting such events in cities around the country. Bouska, along with Jeff Parshley, created the NOH8 initiative soon after Proposition 8 was passed in California in 2008. The project is based on a series of photographs displaying supporters with their mouths taped over with silver duct tape, similar to the way some might be silenced by the proposition.

On March 27, Bouska will be taking his assignment to Tokyo, Japan, as the project’s first international appearance. Japan, the NOH8 website explains, denies legal recognition of same-sex relationships.

Bouska is known for his work with stars such as Barry Manilow, Meghan McCain, James Kyson Lee and Alexa Rae Joel, among others.