PARIS, FRANCE—The 850 year-old Notre Dame Cathedral was damaged by a fire on Monday, April 15. Officials have not determined the exact cause of fire, but it is expected to be the result of renovations the establishment was undergoing.

France 24 English spoke with Stephen Clarke, author of “God Save La France” who said “Every  inch  bares the  imprint  of  these medieval fingers, even if the  shape  of  the  building stands, and  they  rebuild  it, that will be lost…for  me, that’s the saddest thing.”

According to the Cathedral’s website, it was “one of the most notable monuments in France and all of Europe for that matter.”

The Cathedral of Notre Dame is a landmark in France, where King Henry the VI of England was crowned in 1431 and in 1804 Napoleon has crowned Emperor. The building took over 200 years to complete starting in 1163 during the reign of King Louis VII to its completion in 1345. It is located on a little island they call, “The Ile de la Cite” in the middle of the River Seine.

The Cathedral was heavily damaged during the fire, and video footage showed large crowds gathering in a distance as they watched the building aflame. 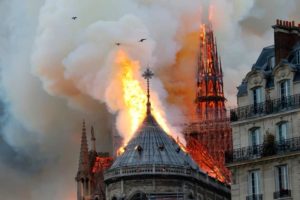 French Firefighters stated “the structure of Notre Dame has been saved from total destruction” and “A lot of relics and treasures have been saved. One of the priorities when the fire broke out…was to retrieve and save what can be taken out.”

French President, Emmanuel Macron tweeted, “I say to you very solemnly this evening, this cathedral will be rebuilt…it is part of our destiny in France and our project for year to come.”

People of Paris gathered in song and prayer to pay tribute to the Notre Dame cathedral.