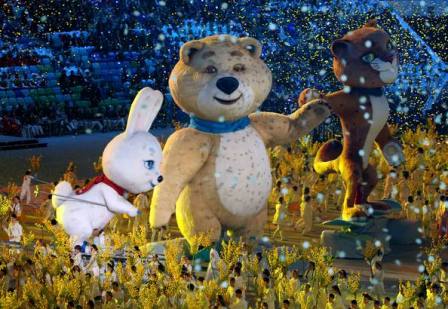 SOCHI, RUSSIA—Organizers of the 2014 Winter Games that almost didn’t go off without a hitch, ended in spectacular fashion with a wonderful show at the closing ceremonies.

Russia began the show with a bit of humor to themselves, as a group of people dressed in shiny silver sparkle ran all over the floor making designs of schools of fish and whales, while three children rode a boat rowed by a pair of clowns representing jesters used during the Czar eras. The group then made a formation of the Olympic rings with the first remaining like a snowflake which was the cause of a glitch from the opening ceremonies.

Russian athletes who won gold medals walked in with their country’s flag and sang the national anthem with a group of 200 children from the national choir. The remaining athletes from the 87 countries represented at the Olympics came into the stadium marching as one. Team USA women’s hockey captain Julie Chu was chosen to be the flag bearer for the United States at the closing ceremonies.

Afterwards the audience was treated to a continuation of what Russia is about. Russian culture and artistry was on display showing the works of Belarusian Marc Chagall and his love for upside down homes in his paintings. Many performers were dressed in traditional clothing worn in different areas of Russia from the western European section to the ends of Siberia.

Russian ballet was introduced as members from the Bolshoi and Mariinsky Ballets performed works from Tchaikovsky on the floor while a massive replica chandelier hung above them. Famous Russian writers were honored in a performance dedicated to them. Such names as Leo Tolstoy, Fedor Dostoyevsky and Anton Chekov were made known to the crowd. An even bigger honor went out to such individuals who were forcibly silenced by communist Russia like famous philosopher and novelist Alexander Solzhenitsyn.

It came time for Russia’s end to the Olympics and the beginning to the next host in line. Pyeongchang, South Korea was chosen to host the 2018 Winter Games and as tradition the Olympic flag was waved by Mayor Seok Rae Lee of the host city. Their presentation began with a traditional playing of a Gayageum to the feeling of springtime and cranes. The five minute performance finished with a look of the logos that the host city designed to show off during the games four years from now including their official logo for 2018.

Prior to the extinguishing of the Olympic flame, a massive set of mirrors came center stage to represent reflection of the past 17 days of competition. Then entered the mascots of the Olympic games consisting of a bear, bunny and leopard came into the stadium rolling around the floor with amazing animatronics in the main character, as the bear waved his hand and made gestures that he could even talk and look an individuals.

An ice figure that was made to look like a bon fire came down from the rafters,, and the bear blew out fire and amazingly let down a bright blue tear from his eye. The bear was an idea from the 1980 Moscow Games where “Mischa” the bear was carried off by huge balloons to close the summer games. The plan to show the bear was implemented as many nations boycotted the games due to the communist rule in Russia.

Despite its scare of lacking security and terrorist threats the games finished with Arturo Toscanini’s Piano Concerto #1 in B flat minor that followed a massive amount of fireworks to conclude the ceremony. Many believe thatRussia pulled off the impossible, but not all Olympics fail as the movement switches into summer for the 2016 games in Rio de Janiero.