UNITED STATES−On Friday, August 21, President Trump spoke at the 2020 Council for National Policy (CNP). He arrived just before noon and spoke for over an hour before departing with the motorcade to return to The White House.

“They spent four straight days attacking America as racist and a horrible country that must be redeemed…And yet, look at what we’ve accomplished,” said President Trump about attacks from the Democratic National Convention.

“Nobody has done more for the black and Hispanic communities than my administration,” and then the President added, “with the exception of President Abraham Lincoln.” 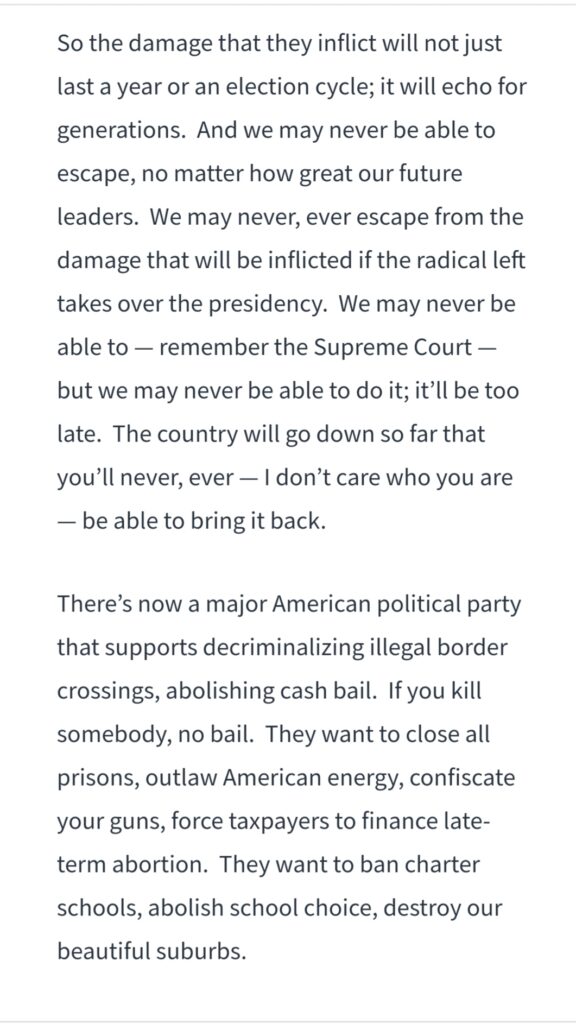 “And you’ve seen the intelligence reports: China very much wants Joe Biden to win. That would be very insulting if they wanted me to win. I don’t think so. I don’t think so. We’ve taken in billions and billions of dollars from China. We’ve given it to our farmers. We’ve given it a lot. They had the worst year they’ve had in 67 years; we had the best year we ever had. With your help, we carried out the largest tax and regulation cuts, by far, in American history,” President Trump added.

“Now they want to quadruple tax us…but the people in this room that are heads of industry-you have some very powerful people in this room-they know the regulation cuts may have been even more important than the biggest tax cuts we’ve ever had.”

President Trump touted the elimination of Obamacare, the dismantling of ISIS,  laws protecting monuments, and statues, the Right to Try bill that allows critically ill patients access to life-saving drugs and new and improved benefits for U.S. military veterans. The veterans are getting better care sooner, and the VA workers now have accountability. They can be fired.

“We ended the Obama-Biden administration’s war on American energy. And the United States is now the leading producer of oil and natural gas anywhere in the world. It’s a big thing. And remember this: If you look at what they’re doing — Biden — he wants to end fracking, end petroleum products — end petroleum. No natural gas, no nothing. End everything,” said President Trump.