UNITED STATES—I can tell you why!

With all the finger-pointing over the number of attendees at the Women’s March on January 21, 2017 they still have it all wrong. Certainly for Los Angeles. I was there. The real numbers were MUCH LARGER.

Newspapers, reporters, and pundits all have it wrong. One official source of attendance-counting comes from aerial photos taken at 3,000 feet. There were helicopters flying over the Women’s March in Los Angeles. This technique won’t cut it for Los Angeles.

Other counting methods relied on METRO ridership. That needs to be debunked. A  rumor was circulating by word of mouth that Metro was offering free rides. I’m here to tell you it wasn’t a rumor. I met lots of people who boarded the Red Line without buying a Tap card or payi 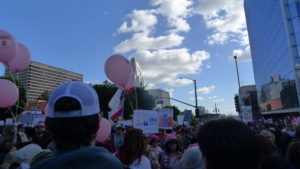 ng for the ride. They were waved through the turnstiles. How long either freebee lasted can’t be calculated. The same thing happened on the way back.

People began arriving at the event beginning at 7:00 a.m., while marchers were still getting off the trains TO JOIN the March at 3:00 p.m. I saw this myself.

We do know that attendees turned over during the roughly 7-hour duration of the March. How can anyone count all the moving parts?   There can be no photo which captures a head count at a fixed point in time which could be accurate. Nor could any subway ridership count be accurate indicator of attendance for Los Angeles.

None of these numbers are right. “LAPD stopped counting.” At least they were being honest.
The inescapable conclusion? The numbers were MUCH LARGER.