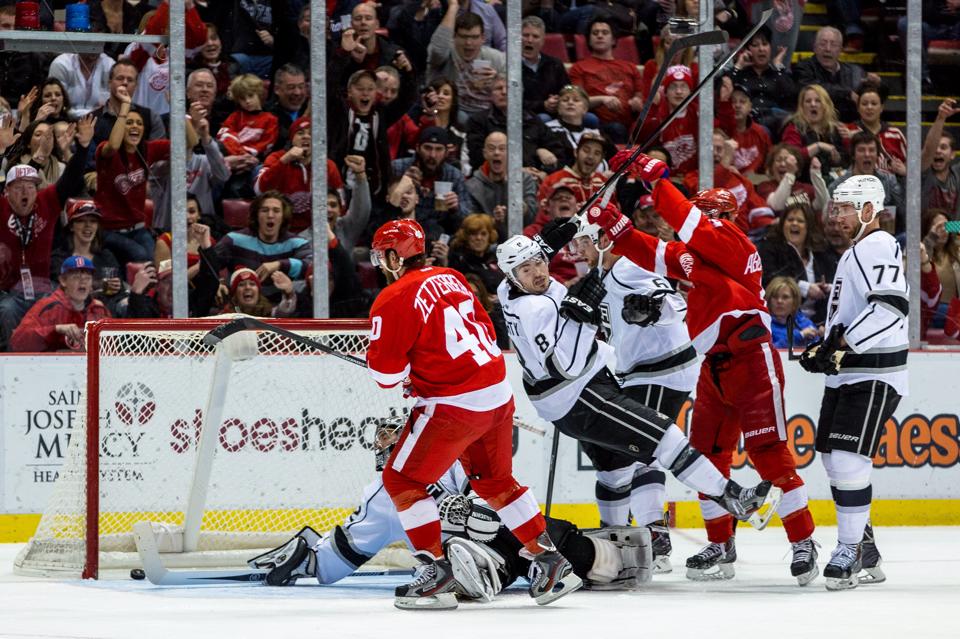 DETROIT—Neither the Kings nor the Red Wings, could wrap their heads around the turn of events that led to OT, where the Red Wings forced a shootout and 3-2 win over the Los Angeles Kings. Niklas Kronwall’s forced shot in overtime led to Tomas Tatar scoring the shootout win at Joe Louis Arena on Saturday night

The Red Wings came back to the one place that they have missed in over three weeks. Tonight’s first game of 2014 at the Joe came against the Kings whom they met for the last time this season. Detroit took a 3-1 win atStaples Center a week ago with Tomas Tatar and Riley Sheahan coming up big for the majority of their youthful roster.

Tatar came back after burying his father who passed away the day before his goal against Los Angeles. His return was much appreciated by his teammates and fans. The Kings started a five-game road trip, looking to keep up their two-game streak over hated opponents from Vancouver and St Louis. Jonathan Quick hoped to continue giving problems to road opponents as he vied for his first win in Detroit in four meetings.

Detroit saw a pattern that continued from Thursday’s match against New York, as both teams kept the game scoreless through a large part of the first period. Both teams shot eight on goal while Detroit had yet to score a goal in the last seven consecutive periods.

Los Angeles scored midway into the second period as Mike Richards who had been due for a shot into the net found his first goal in 24 games. Richard’s seventh goal of the season came on a pass from Slava Voynov who found Richards in the Detroit crease. The Wings felt the drought of not scoring on the puck on the stick of Captain Henrik Zetterberg for his 15th. The success came on a pass from Gustav Nyquist who found a window between Justin Abdelkader’s legs to backhand the puck in motion to Zetterberg.  Detroitnearly made it a 2-1 lead with Abdelkader on a wrap around for the puck to be stopped by the skate of Quick before it could cross the line.

Before the game went on TV timeout, Richards ran into Howard at net which escalated into a scuffle between the two teams and with Team USAteammates Quick and Howard whom he bumped into delivering a few words of anger. “We were just discussing what we were going to do in Sochi,” Howard joked when asked what he said to Quick during the timeout.  The remainder of the period went silent on goals and taunts with the Kings taking a lead on the offense, outshooting Detroit 17-9.

Los Angeles opened the third period in a neck-to-neck race to break the 1-1 tie going into the third period. Detroit took its shots on Quick with Tomas Jurco still trying to score his first career goal. Jakub Kindl and Colin Fraser got into a scuffle behind the Detroit net as tensions rose prior to the game’s conclusion. On LA’s final power play of the game Drew Doughty took a drive from the stick side of Jimmy Howard that went off the skate of Richards to set up Jeff Carter on the glove side for a centering shot that Howard couldn’t snap to in time for the Kings to gain the lead. It became Carter’s 18th of the year and put the Red Wings in a corner with less than two minutes left.

Detroit’s last chance came on a much-needed power play where they tried to pull Howard off, but couldn’t pull the trigger until there was a minute left. The Wings caught a huge break as a drive from Niklas Kronwall deflected off of Jarret Stoll’s skate, went up in the air to hit the mesh and fell on the back of Quick to go in the net and even the game.

“It shouldn’t have counted, but at this stage of the game, where we are in the standings, we’ll take it,” Kronwall said. “I don’t think anybody knew where the puck was. You look at the guys and everybody was waiting, saying where is it. Then it bounced off the goalie’s back and in.”

It came as a complete shock to both teams, as the whistle is usually blown (according to Rule 85) when the puck hits the mesh above the rink, but it left no reason to negate Detroit’s goal. “I didn’t see anything on the goal,” saidDetroit coach Mike Babcock. “The guys told me it hit the top of the mesh. We couldn’t see anything from the bench. The referees obviously didn’t see it, so obviously they didn’t know.” It led to the end of regulation with Detroitoutshooting the Kings 13-8, but the talk about what had occurred never ceased on the bench. “That’s embarrassing for the league,” Kings coach Darryl Sutter said. “It doesn’t matter if we would’ve scored it or they scored it.” “They just said they didn’t see it,” Doughty said. “It’s unfortunate. We should’ve got two points. “I’ve never seen that before, that’s for sure.”

The five-minute period went by with the Red Wings in complete control, shooting five times at Quick with no result. It would come at the hands of his teammates to put the team ahead with Tatar scoring the first point in honor of his dad. Zetterberg and Jurco failed to score but it would be Tatar and Howard to take the game for Detroit as he stopped Anze Kopitar, Carter and Richards with pad saves in front.

With a much-needed win by the Red Wings and their goaltender’s performance in net, it gave Howard a highly desired win on his record. It became the ninth victory for the Detroit goalie with 30 saves and a .938 save percentage.  Detroit looks forward to have a normal game against St. Louison Monday, while the Kings set for back-to-back games against Boston and Columbus.