UNITED STATES−Congressman Adam Schiff (D-CA) reportedly advised the moderators of Twitter, YouTube, and Google to shut down or censure what Schiff considers Fake news regarding the coronavirus.

In a letter dated April 29, Schiff commended Twitter for censoring controversial posts in the past and requested that Twitter, YouTube, and Google remove all posts that involve the coronavirus that is not from an authority on COVID-19.

“I commend you for steps you have already taken,” Schiff wrote, “to highlight information from official health sources and to remove or limit the content that promotes harmful medical misinformation.”

Schiff went on to be specific naming instances. 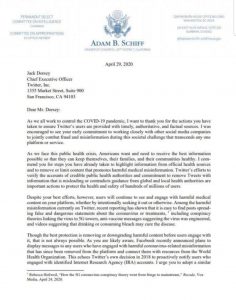 “Among the harmful misinformation currently on Twitter, recent reporting has shown that it is easy to find posts spreading false and dangerous statements about the coronavirus or treatments, including conspiracy theories linking the virus to 5G towers, anti-vaccine messages suggesting the virus was engineered, and videos suggesting drinking or consuming bleach may cure the disease.”

Schiff shared in his letter that Facebook recently announced their plans to display their messages from people they believe engaged in spreading misinformation about the coronavirus and directed them to resources from the World Health Organization (WHO) as one of the authorities on coronavirus.

The W.H.O. is currently under scrutiny from world leaders including President Trump and the Trump administration for not being forthcoming about the initial spread of the coronavirus at its onset. The U.S. has since dropped its funding of the W.H.O. following their lack of response in controlling or stemming the spread of the coronavirus to the U.S. and its territories.

The suggestion of Censorship by Rep. Adam Schiff comes after Schiff, as Chairman of the House Intelligence Committee reportedly failed to report what was coming out of China.

The House Intelligence Committee has been accused of neglecting this information while working on the Impeachment inquiry.  News reports indicate that Schiff is also being sued by physicians for censoring the vaccine debate.

Accusations on social media suggest Schiff is using his influence with the moderators of social media as a diversion tactic to keep the focus of the attention off of himself and the House Intelligence Committee for not acting more swiftly when the coronavirus hit China.