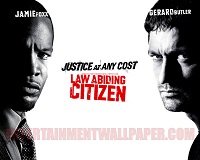 HOLLYWOOD—The power of cinema is an amazing thing, especially when it comes down to morals.  Recently I saw the thriller “Law Abiding Citizen,” starring Jamie Foxx and Gerard Butler, and it made me question something rather intriguing: why is it that as moviegoers we root for the bad guy over the good guy?  I mean our entire lives we’ve always been taught that good always triumphs over evil, but is that just a saying or do we actually want the villain to get away with murder?

In the film, Foxx plays high-powered attorney (Nick Rice) who would do almost anything to excel in his career of becoming an acclaimed district attorney; even if it means “throwing” a case to keep his squeaky clean record, but as we all know every action has consequences.  Foxx devastates Butler’s character (Clyde Shelton) whose wife and daughter were murdered by the culprits in the case.  Since the justice system failed him, Clyde chooses to take matters into his own hands by eliminating the two offenders as well as anyone else who was involved in the case.  Yes, Clyde is killing people, but I didn’t perceive him as a villain, neither did many of the moviegoers surrounding me.  He was punishing the legal system for wronging him, and as a viewer I believe many people identified with his stance.  The legal system is supposed to provide justice, not abuse it.  Clyde is perceived as the hero and Foxx’s character (Nick) as the “villain.”

What is it about the bad guy that sutures the moviegoer?  Speaking as a psychologist, the argument could be the fact that we identify with the villain’s motives.  If we were in that situation, we’re probably telling ourselves we’d behave in the same manner. This brings me to the film, “Training Day” starring Denzel Washington and Ethan Hawke.  Washington’s (Alonzo Harris) is a corrupt detective who does what he wants, when he wants. He steals money, takes drugs and abuses the badge because it’s a sign of power.  Similar to Foxx’s character in “Law Abiding Citizen,” they’re both in positions of power, and power corrupts the mind.  Villains tend to have power and it’s something that resonates with many of us.

As a viewer to some degree you want, Harris’s character to be taken down, but the scene that puzzles many viewers is when he discovers a wad of cash hidden inside a house.  At that moment, as a viewer you’re asked the question, what would you do in that situation?  Would you take the money, would you turn it in?  Ethics and morals come into place, and of course if you’re in a dire situation you may contemplate taking the money.  Remember it only takes one bad apple to spoil the bunch, so people can easily be influenced by those surrounding them unless they have tough skin.

Then we have Heath Ledger as The Joker in “The Dark Knight.” He was so intense, so visceral, so wickedly evil you were drawn to him.  As viewers we like the antagonist more than the protagonist, is this because they’re not one-dimensional characters?  That’s a possibility or it could be the fact that there’s a method to their madness we don’t know and that intrigues us.  Al Pacino is idolized by many for his performance in Oliver Stone’s gangster classic “Scarface.”  So many people adore the character even though he is a mobster who smuggles drugs, murders people and even hits his sister.  This isn’t to say all bad guys are male, just take a look at Barbara Stynwack of the 1940s film noir classic “Double Indemnity” who mesmerizes the spectator.

We sympathize with the antagonist over the protagonist because they get away with things that we normally wouldn’t get away with in society.  This isn’t to say the bad guy doesn’t get punished because in cinema you have to pay for your sins.  Alonzo Harris and Tony Montana are both brutally killed at the end of the film, and The Joker, well he gets locked away in an insane asylum; so in a sense no evil deed ever goes unpunished, it’s the law of dynamics for every action there is a reaction.

The thing about life is it’s so much easier to be bad than it is to be good.  Its takes a lot more courage and resistance to do the right thing, than it does to the wrong thing.  So with cinema we get the opportunity to act out our dark side to a degree without being punished by identifying with a character who we feel has a piece of us in him or her.  So the next time you watch a film and see yourself more drawn to the villain than the hero ask the question, why?