UNITED STATES−Orange County, California Under Sheriff, Don Barnes is accused of defying Sanctuary City laws by releasing the names of detainees, and violent offenders being released from prison to the public.

Sheriff Barnes cites SB 54 as a bill signed into law in 2017 that forbids the notification to Immigration and Customs Enforcement (ICE) upon an inmates release to only the most violent offenders. 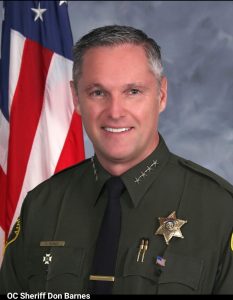 ICE requested to be notified of the release of 1500 inmates in 2019. A total of 238 of those were arrested again in Orange County for new crimes including rape, battery, and robbery.

Barnes told Fox News that he is not to tell ICE about the release of these criminals, but he and his deputies may notify the public.

California’s Attorney General Xavier Becerra stated to Fox News that, “State law is state law, and it’s my job to enforce state law. I will do so.”

The interviewer asked, “Does that mean a lawsuit against the Sheriff’s Department or the arrest of the Sheriff?” To which Becerra answered,
“I think I just answered that.”

Judicial Watch reported an illegal immigrant who was detained after getting a DUI charge on January 25. Under the Sanctuary City Laws, the detainee was held illegally, but he committed a crime. The illegal immigrant received a cash settlement because of the immigration hold.

President Donald Trump indicated on February 4, during his State of the Union address, the murder of Rocky Jones from Farmersville, California who was murdered in a killing spree by an illegal alien on December 17, 2018. That suspect was arrested five times and deported twice before.

In a press release Acting Ice Director Albence applauded Sheriff Barnes efforts. According to estimate, over three million illegal immigrants reside in the state of California.  One hundred criminals are released into Los Angeles on a daily basis.

18 U.S. Code S 1071 states that it is “an offense to harbor or conceal any person for whose arrest a arrant or process has been issued, so as to prevent the fugitive’s discovery and arrest.” 8 U.S. Code S 1324  prohibits sheltering illegal aliens from authorities. If convicted of these crimes, a person may be sentenced for up to 5 years in prison.