WESTWOOD—On February 24 at 10 a.m. authorities were advised of a “Hands Off Ukraine,” protest taking place in the 11000 block of Wilshire Boulevard where around 100 protestors gathered. By 3 p.m. the crowd grew significantly. They gathered outside the Federal Building following news of Russian President Vladimir Putin invading Ukraine.

Crowds began gathering at the location on February 20 prior to the invasion. Another protest is expected tonight in Studio City. According to reports, additional protests are expected throughout southern California and San Francisco region.

Hundreds of protesters stood outside San Francisco City Hall with signs that read: “In solidarity With Ukraine.” “We should care,” one protester stated and “It affects all of us.”

One of many posters outside in LA read, “Stop Putin Now-Today Ukraine-Tomorrow- US?”

A large crowd gathered outside the California State Capitol in Sacramento with signs reading: We Want Peace” and “Stand With Ukraine.” 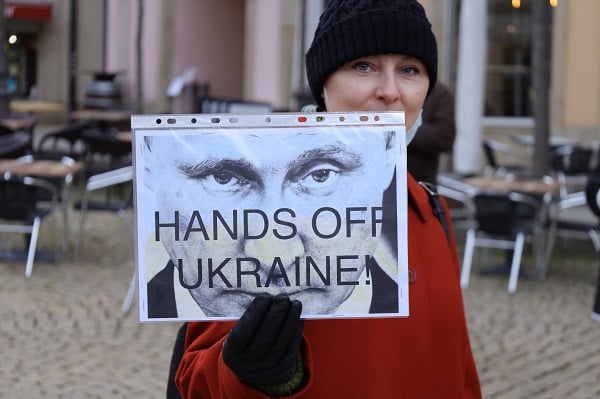 “Russia treacherously attacked our state in the morning, as Nazi Germany did in WW2. As of today, our countries are on different sides of world history. Russia has embarked on a path of evil, but Ukraine is defending itself and won’t give up its freedom no matter what Moscow thinks. We have severed diplomatic relations with Russia. For all those who have not yet lost their conscience in Russia, it is time to go out and protest against the war with Ukraine. We will lift sanctions on all citizens of Ukraine who are ready to defend our country as part of the territorial defense with weapons in their hands. We will give weapons to anyone who wants to defend the country. Be ready to support Ukraine in the squares of our cities,” said Ukrainian President Vladimir Zelenskyy in a statement.

Hands Off Ukraine Protests are transpiring globally outside The White House, in London and the streets of Russia.