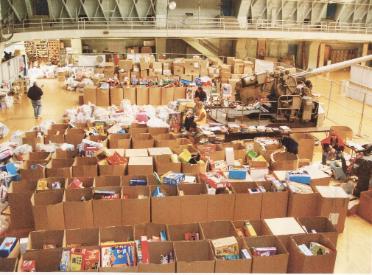 LOS ANGELES—The holiday season marks one occasion each year where we exchange gifts with loved ones. While most of us are extremely fortunate to have the ability to give and receive gifts, others are not as lucky.  Due to numerous factors, many individuals and families are unable to participate in the art of exchanging gifts with those near and dear to their hearts.  Things are so bad for others that they do not celebrate the holidays at all due to their unfortunate circumstances.

But thanks to a little assistance from volunteers and members of the Los Angeles Fire Department, individuals and families are experiencing the joys of the holiday season.  The LAFD Spark of Love Toy Drive collects an estimated 80,000 to 115,000 toys each December for distribution to individuals and families in the City of Los Angeles.  L.A. is one of five counties in California that participate in the year-round Spark of Love Toy Drive with each program operated independently by each county.

Michael Marquez, LAFD Firefighter and Program Coordinator for LA’s Spark of Love Toy Drive for the last 17 years, said in an interview with Canyon News that the city’s program was born 1976 in the trunk of a vehicle belonging to then-Captain Rey Rojo where he was transporting 200 leftover toys from Fire Station 33 in San Diego and attempting to deliver them to children in need at several hospitals.  The hospital was unable to accept the gifts from Rojo due to there being a lot of “red tape associated with the long list of gratuitous gift measures,” according to the LAFD’s Spark of Love Toy Drive website.  The toys were eventually delivered to children by a special task force.

After numerous thank you letters were received, Rojo was asked to develop a pilot program for the LAFD that would consist of toys being gathered and distributed during the holiday season.  When the program began, Fire Station 3 in L.A. was the initial location where toys would be stored before distribution.  After moving between several stations, the distribution eventually settled in its current location at the Frank Hotchkin Memorial Training Center at 1700 Stadium Way in L.A.  Also known as “Toy Central,” the center also serves as a central drop-off point and serves as a location where the toys are packaged and sent.

While donations of toys are a large part of the Spark of Love Toy Drive, cash donations also play a vital role as individuals and businesses often donate money. To help with this process, LAFD has worked with non-profit organization Sertoma since 1980.  Operating under the “Service to Mankind” acronym, The LAFD Sertoma Club handles all cash donations that are made to the toy drive.  According to Marquez, 100% of the donations go to Sertoma, who in turn purchases toys for the drive.  One of the annual participants is Francis Polytechnic Senior High in Sun Valley, which donated $23,000 to the toy drive this year.

Marquez added that LAFD’s Spark of Love Toy Drive operates under The LAFD Sertoma Club so none of the donated money goes towards the fire department’s general fund.  The Sertoma members are volunteers that are comprised of active and retired firefighters, intercity community people, and college students from fire technology programs of several local colleges. This small group coordinates with 430 agencies, including schools, churches, families, and the Marines as well as assisting the Highway Patrol and the Los Angeles Police Department with toy pickups. All warehouse operational costs, water service, meals, pantry supplies, caps and t-shirts are donated by Sertoma.

The LAFD Spark of Love Toy Drive, now in its 36th year, and fresh off receiving an estimated 100,000 to 110,000 toys this past holiday season, has come a long way since its humble beginnings in 1976 and has grown to play a vital role in enriching the lives of individuals and families in L.A. County.  For more information about LAFD Sertoma please visit lafdsertoma.org

Donations of toys and money are accepted year round to help families who experience any fire or disaster or have medical concerns.  For information about how to donate please contact retired LAFD Deputy Chief and Sertoma Club President Rey Rojo at rey.rojo@lafdsertoma.org